Darmon Meader – a founding member of the New York Voices – is one of the most prodigiously gifted tenors, multi-instrumentalists, composers and arrangers in recent memory. His charts with their breathtaking [choral and instrumental] orchestrations are all the rage among mid-size and large-size ensembles, and choral groups. The busy New York musician’s second album Losing My Mind, is one of several post-pandemic releases, the music of which is gathering momentum on radio waves. Listening to this elegantly produced repertoire, it seems only a matter of time before Mr Meader hits the soundstages where high-quality live music is heard. 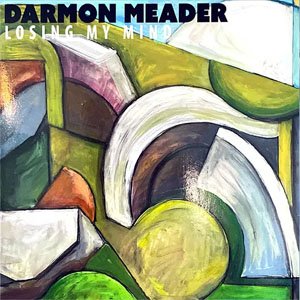 Several aspects of Mr Meader’s musicianship shine brightly in the glorious repertoire on this album. To begin with, and as expected, he brings his hair-raising gift for harmonics to every song on this album. This is particularly evident not long after the start of the album – on Last Call, to be precise, on which he shares the vocal spotlight with Rosana Eckert. Playfully dodging [phonetic] vocalastics with Miss Eckert, Mr Meader ups the ante in short order, extending his hi-jinx to the rest of the chart as well. And as if by magic the quintet is transformed into what seems like a largish ensemble. The sheer ingenuity of Mr Meader’s orchestration has everything to do with this.

Despite the penchant for swinging rhythmically, there appears to be an undertow of mellow bitter-sweetness that drives the emotional palette of the music in the first half of the repertoire – up until Gaia’s Lament, to be precise. From there onwards, a joyful swing reigns supreme. Mr Meader ignites the music almost as he lets his vocal cords slip the song from his lips. With his vernal lyric tenor, grace of line and vivid response to mood Mr Meader proves well-nigh ideal in this conspectus from the artist’s pandemic-driven ennui. The anguish of isolation is often wrung out of a lyric [cue Lembra de Mim – where the horns play their poignant part, too].

But every so often we are treated to unfettered joy bursts forth as well. Last Call, with its breathtaking vocal gymnastics and the rhythmic propulsion delivered by piano, bass and drums, and I Hear Music. Mr Meader’s musical colour palette seems to explode elsewhere – whenever he uses a string quartet to describe intensely moving emotions, singing with a haunted, bleached tone, allowing the strings to deliver a sudden infusion of bitterness. Here his subtle vibrato is used to maximum effect. The song Lovely Day brings together the New York Voices, who together put the shadowy powers to flight in volleys f gleeful vocal harmonies.

Mr Meader does not get enough praise for his performances on woodwinds. From the subtle harmonic colours that he adds on each of the charts that he brings his horns out to, he could easily, should he wish, bring his horn-playing into the limelight with a solo or two. We are, in fact treated to a brilliant instrumental break before the recording ends – on The Song is You. However, in his infinite wisdom, he leaves most of the soli to Steve Kenyon [baritone saxophone], Scotty Barnhart [trumpet] and Jay Ashby [trombone], while he fills the soundscape with his svelte harmonics on several other tracks. Mr Meader’s eloquent voice is all that it takes to bring off his repertoire with such panache [cue All My Loving and The Song is You] that only a hair-shirt purist could complain.

As vocal recordings by a tenor, few would rise to the occasion and give such a sparkling performance as Darmon Meader. His lyrical renderings, touching extremes of sensitivity and the sheer poetry of his voice make this an album to die for…