In 1960 Charles Mingus released a composition entitled “M.D.M” [Candid]. This prescient work could probably have been written much earlier. But what was enshrined in it was important; it was drawing a line between Duke, Monk and himself; the equivalent in the world of classical music would be B.B.B. or Bach, Beethoven and Brahms. Indeed, when you think about there are no composers in the 20th and 21st centuries than these three great artists. Monk was unique among all three, for he – like Charlie Parker – revolutionised the melody, harmony and rhythm – in other words – the way his instrument was played; something that had not been done in at least 100 years; and it’s highly unlikely that anything like Monk’s music and performance will ever be surpassed. 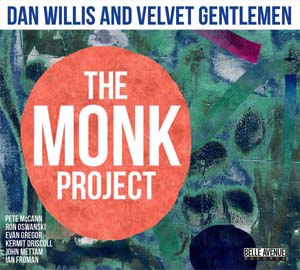 There have been many serious – even great musicians – and pianists who have attempted to interpret Mr Monk’s music. Chick Corea, with his iconic Trio Music with Miroslav Vitous and Roy Haynes [ECM, 1981] is probably the finest re-enactment of Mr Monk’s world by a pianist, although Keith Jarrett used to play compositions by Mr Monk regularly – long, brilliantly conceived variations, and Fred Hersch continues to include most studio and live performances [usually at the end] with a work by Mr Monk, also quite brilliantly wrought each time. In 2017 Frank Carlberg released Monk Dreams Hallucinations and Nightmares [Red Piano] an extraordinary large ensemble meditation on Thelonious Monk. And in 2019 the late, great pianist Frank Kimbrough his own monumental – and also honourable – attempt at cataloguing all of Mr Monk’s work with bassist Rufus Reid, winds player Scott Robinson and drummer Billy Drummond. [Sunnyside Records]. To my mind, however, the best and most iconic album of Mr Monk’s music was the late Heiner Stadler’s Tribute to Bird and Monk [Tomato, 1974 and 1989, Labor Records,2010].

Now however, there is another stellar disc to be added to that very short list and it is the near hour-long disc by Dan Willis and Velvet Gentlemen, The Monk Project is probably the most intriguing, least predictable [something that almost everything other than those releases mentioned above suffers from] and thus, most imaginative recording of Thelonious Monk’s work. Among its most intriguing aspects is the only keyboard is a Fender Rhodes, not something you would – perhaps even Mr Monk himself – have thought to use to express his brilliantly bluesy music. But Mr Willis makes a bold move by getting Ron Oswanski to play it – and even solo at times. He also embellishes the radiant tintinnabulations with Pete McCann’s moaning electric guitar lines. Best of all Mr Willis – boldly inhabiting the spirits of both Mr Monk and his tenor saxophone playing doppelgänger, Charlie Rouse – leads from the front with his own brilliantly quirky and inspired playing on an array of single and double reeds, and EWI.

With his arrestingly slowed-down tempi – best expressed at the beginning of ”Rhythm-a-Ning” for instance – Mr Willis puts a truly individual stamp on his interpretations [and impersonations] of Mr Monk and Mr Rouse. Elsewhere [“Hackensack”, to be precise] Mr Willis hints – even threatens – turn Mr Monk’s definitive skippy, angular rhythmic conception into a rippling Caribbean groove. You cannot help but feel that somehow, where his itinerant spirit roams, Mr Monk is listening with a smile. Mr Monk was always concerned that his music was never played the way it should have been played and bemoaned the fact that no one really understood – or even made an intelligent effort to understand – his music. He is known to have said so in one of his rare answers to a musical question. But Mr Monk’s music is also the most difficult to play. Like the Bebop inventions of Charlie Parker and Mr Mingus’ monumental compositions it will probably be several generations for everything musical to be discerned. The music of those geniuses dwells in a proverbial Aristotelian realm.

It is this kind of world that Dan Willis visits in the last two items on this set – “Pannonica” a profoundly meditative take and the spectacular interpretation of “Think of One” with which he brings to an end this wonderful recording. The latter is a spectral world that mixes twangy, bluesy guitar lines, the wailing saxophone and the spectral strains of Mr Willis’ EWI. Perhaps in waiting patiently to turn his attention to some of the most important works in the past 100 years or so Dan Willis has propelled the music into the future with his extraordinary Velvet Gentlemen. Truly an album to die for…