That the drummer Dan Aran has an New York Family should hardly come as a surprise. The porous nature of the art of music today lends itself to a breathtaking amount of – as Charles Mingus once called it: “Osmotin”. The great bassist did not live to see the array of musicians who would be drawn to Jazz, but he instinctively knew – like the great musicians of his day – that there were no borders in music. The growth of musicians who have made the journey to Jazz in a relatively short period of time from Israel alone is staggering. The most enlightened among them have brought a Middle Eastern flavour of music that has been absent for centuries. 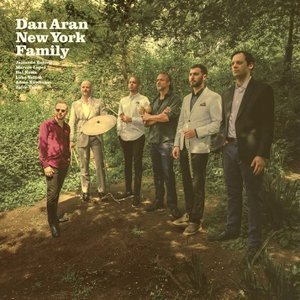 Suddenly we are now faced with the fact that music should never have been defined as one that some of the more reactionary elements within the industry practitioners attempted to create. Truly good music such as what we hear on this disc should never live in a lonely little CD bin. And the chances that this will not happen, should New York Family get the requisite amount of airplay. Every track is a breathtaking ear-worm in its own way. The best of these tracks are the ones that include Zafar Ayala’s oud with its undulant melodies and plangent chords evoking the lonesome echoes of the desert while creating an aura redolent of the soaring redemptive aura of the blues. The resultant “Gits” is the masterpiece in question.

However, when Mr Aran does play a Blues as in “Blues for Tsofi” his handling of the form is requisitely idiomatic. One misses a vocal here, but even without one we hear, in Adam Birnbaum’s pianism and in Luke Sellick’s low growl a melancholy that soars in much the same way as one that rises out of American soil. But what is even more striking is the manner in which we hear an unabashed swing from Mr Aran’s playing as he guides the musicians into a real of unadulterated and rippling jazzy grooves. Consider “Five Corners” which jumps out of the gate with Mr Aran clearly punching above his weight. In fact each of the musicians does likewise as well, especially the extraordinary flutist Itai Kriss – heard here outside his more recent musical excursions into Afro-Cuban territory.

Mr Aran and Mr Kriss do just that once again, this time on a son entitled “Jaxter and the Shark” which is split between a swinging percussive jazz idiom that turns on a dime into a swaggering guajira with percussionist Marcos Lopez and vocalist Jainardo Batista joining Mr Aran who has clearly mastered clave as well. The revelation again is Mr Birnbaum, who plays with classic tumbao. And then suddenly after a dazzling display of virtuoso playing across idioms Mr Aran returns the group to some of the finest readings from the classic American Songbook. Every student in any contemporary (Jazz) programme in music conservatory learns how to play American Standards. But few play them with such extraordinary soul as Mr Aran and his musicians do. “Hello Young Lovers” is re-visited with brilliant results using Afro-Caribbean rhythms.

The drummer does not take the easy route either, but negotiate rather challenging ones here. “Peace”, “Soul Eyes” (the latter brings back Mr Tawil leading in with his magical pizzicato playing on oud leading into a mesmerising solo) and “Like Someone in Love” (on which the viirtuosity and creativity of both Mr Birnbaum and Mr Sellick dazzle) shine like gleaming gems on this album> but the spotlight belongs to Mr Aran, whose playing and inspiration is consistent and at the highest level throughout the disc which is one to absolutely die for…