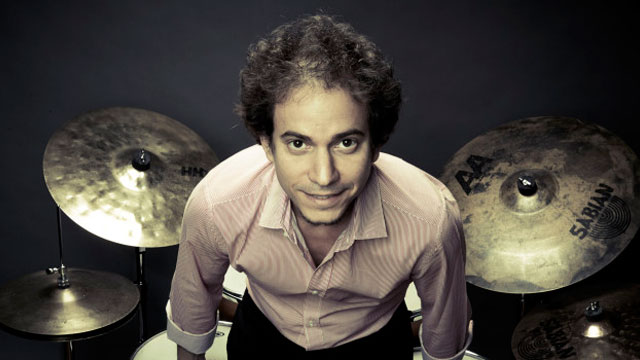 It is rare indeed to find drummers who can think like pianists; even rarer to find one that thinks like a saxophonist, a trumpeter, bassist and all of the above all at once. One of these extremely rare birds seen and heard to fly in the face of convention is Dafnis Prieto. Even in his sonic variances, Mr. Prieto’s sleek and unruffled technique, stylish intelligence and the watertight structures of his music appear remarkably consistent and justify his reputation as the prototypical modern drummer and ultimate role-model for conservatoire students and other young drummers. Listening to his music, not just this wonderful record – Triangles and Circles – but all of his solo repertoire, you’ll notice that his music becomes increasingly angular, unfettered and bracingly communicative over time. While listening to this disc, however, you will find the music leaner, more sharply accented and contrapuntally complex than in his earlier sextet recording. In “Triangles and Circles” for instance, the early-movement broken chords playfully capture the composition’s depiction of a pianist who can’t keep his hands together, and the staccatos in Manuel Valera’s solo have a lovely, woodwind-like edge to them. All of this is rather masterfully matched by the rest of Mr. Prieto’s soul-mates in the sextet, whose contributions are refreshingly wry and full of character. 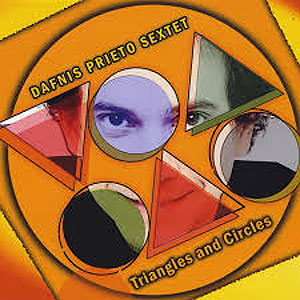 Dafnis Prieto is a percussionist who exploits the resources of the myriad of drums in his ensemble. There is no pussyfooting here. He is an imaginative musician; a most compelling manipulator of the character and personality of each of the items he plays. He is a sensuous and gentle caresser of the snare and fleet of foot when getting cymbals to sing their eternal brassy tunes. With tom-toms, tympani and bass drum he is more sinuous and exercises more machismo, showing them who’s the boss. These approaches make for infinite variations in the angle of attack and the enjoyment of extracting not just polyrhythms, but also melody and harmony. And this is evident in the exuberance of Mr. Prieto’s unique sound. The innumerable improvisations come off especially well, with the drummer relishing their extrovert brilliance and their textural subtleties. His playing is touching without affectation. This is eminently clear in the elegiac ballad “Flores” composed for Mr. Prieto’s late friend the ineffable bassist Charles Flores. Its rarefied simplicity evokes the finest odes of John Keats and the parts of Claude Debussy’s symphonic poem, “Prélude à l’après-midi d’un faune”. The bounding tempo of “Triangles and Circles” and soulful rubato of “Blah Blah Blah” reflect the majesty of some of the other repertoire on this album.

I would be remiss if I did not spare a nod towards the other members of this wonderful Sextet. The two woodwinds players – Peter Apfelbaum and Felipe Lamoglia – and trumpeter Mike Rodriguez work together to embellish the music with poignant statements. Pianist Manuel Valera’s impetuous fingers put a humane spin on the lofty pianistic paradigms that have been set to far-reaching standards in the daring arpeggios and melismatic trills with which the music is made infinitely more memorable. And the haunting tonal shadings of Johannes Weidenmüller speak to the bassist’s endless ingenuity. Their contributions to the startlingly original music composed by Dafnis Prieto make for a disc that is inventive and appealing. Overall, this amounts to a most attractive issue.

Track List: Back and Forth; Triangles and Circles; Flores; The Evil in You; Blah Blah Blah; Blah Blah; Two for One; Opening.

Dafnis Prieto (born July 31, 1974) is a Cuban-American bandleader, composer, drummer and educator. He is a 2011 MacArthur Fellow. “His arrival in the U.S. has been compared to that of an asteroid hitting New York.” Indeed, within a short period of time Prieto’s revolutionary drumming techniques had a powerful impact on the Latin and jazz music scene, locally and internationally. He is a recipient of various awards, including the 2011 MacArthur Fellowship Award and Up & Coming Musician of the Year by the Jazz Journalists Association in 2006. Prieto was nominated for Best New Artist at the 2007 Latin Grammy Awards. The album Dafnis Prieto Absolute Quintet was also nominated for a Grammy Award for Best Latin Jazz Album that year. He has also received new works commissions, grants, and fellowships from Chamber Music America, Jazz at Lincoln Center, East Carolina University, Meet the Composer and the Doris Duke Foundation. Read more…