Home Music Clare Fischer: Out Of The Blue

Of all of the doyens of modern music, Clare Fischer is one of those who knows no limits to his explorations. This record, Out Of The Blue, produced by his son, Brent Fischer, three years after the master’s death, is a dazzling recital (from a musician also known as a pianist-keyboardist) discerningly assembled and held aloft by three pillars: the segmental Love’s Walk, the ethereal Out Of The Blue, with Clare Fischer whisking the 20th Century from under its nose; and, to conclude, a statuesque portrait 49 (Larry Ford). If one’s reflexive default at the prospect of a keyboard recording – even an exquisitely curated Clare Fischer one – is likely to turn ears as any made. 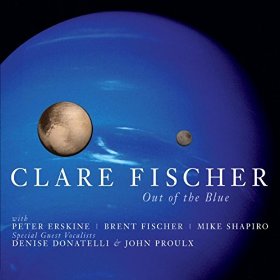 Along the way, in a deftly balanced presentation of strikingly contrasting essays Clare Fischer offers beautifully turned, reflective and buoyant readings of sui generis ‘ concert’ works. Love’s Walk with its exquisite rondo-like opening, whose subsequent minor-scale movement trips along in a manner keyboardists seem universally reluctant to pursue, is simply a pearl. Each of the choruses is sweetly emotional in nature, skilfully preparing the way for the highly distilled and contemplative variation-laden solo piano medley When You Wish Upon A Star/Someday My Prince Will Come. The seasoned qualities of Clare Fischer heard to such memorable effect in this persona are reawakened in the stunningly voiced combinations of sounds from his exquisitely-tuned grand piano.

Unusual here, also is how even an emphatically non-piano-playing listener can effortlessly alight on the kinds of malleable Clare Fischer conceits enjoyed habitually in both the composer’s works as well as in his imaginative re-workings of others’ studies and pieces. Great instrument aside, this is largely down to the judicious alchemy of Clare Fischer’s perception of hoe architecture and improvisational colour can collide to mesmerising effect. The aforementioned medley and following, two tracks down, Two For The Road, are cases in point: the glistening parallel motion over the pedal throughout, often a sensitive gesture, enticingly holds back to set up the richly-textured gravitas that follows. Inexorable momentum here is been of fervent authority, a virtuosity of combined effects without gratuitous excess.

The canonic Cascade Of The Seven Waterfalls, probably written a little later in his career, recalled for the work’s beauty redolent of a proliferation of contrapuntal wizardry, can often leave the listener gasping for breath. Perhaps, not surprisingly, musicians are beguiled by Clare Fischer’s writing, of his intertwining lines in his ever-inventive homage to polyphonic interpolations. This performance will persuade you that Clare Fischer’s unsurpassed technique never obfuscates the essence of jazz. The music of Clare Fischer is fragrantly atmospheric especially on this recording. To close, with its ingeniously compressed lines in other fare here and the composer’s outrageously clipped endings the music is celebrated in some style by the man himself – Clare Fischer.

But it’s the gripping drama and involvement in the Brasilian rhythms that remind one that Clare Fischer was far more than a writer of jazz melodies and his durable recalling of material by Jobim and Bonfa sends this recording in a captivating direction with almost hypnotic abandon – especially in the solo material on it. The ensemble works, magically produced by his son, bassist and percussionist, Brent Fischer, are truly symphonic in grandeur and the works harness not only Clare Fischer’s power but also the music of the players who appear on the disc. The younger Fischer has, as he is often wont to do, has laid down as if for posterity, another marvellous Clare Fischer disc. It features all of the underlying immediacy and restlessness in Clare Fischer’s rhetoric which leads the music from choppy waters to proverbial calm.

Lastly, father and son have become partners in grandeur, flair and emotional risk. And if this record is any indication, that’s been so worthwhile.

Douglas Clare Fischer (October 22, 1928 – January 26, 2012) was an American keyboardist, composer, arranger, and bandleader. After graduating from Michigan State University (from whom, five decades later, he would receive an honorary doctorate), he became the pianist and arranger for the vocal group the Hi-Lo’s in the late 1950s. Fischer went on to work with Donald Byrd and Dizzy Gillespie, and became known for his Latin and bossa nova recordings in the 1960s. He composed the Latin jazz standard “Morning”, and the jazz standard “Pensativa”. Read more…