First, hats off to Bigmouth for astonishingly accurate and coordinated accounts of this music even in sections that move faster than the speed of thought or in the same profound equilibrium of the palpitations of the human heart. Thus it is fair to say that Bigmouth pushes the envelope wider than any recent recordings, admirable in their own right, by other musicians of Chris Lightcap’s generation. This disc feature Mr. Lightcap’s deeply resonant instrument whose well-regulated action and varied timbres will likely attract double bass mavens. More importantly Chris Lightcap has entrusted the music to the two tenor saxophone of Tony Malaby and Chris Cheek, the virtuosity of Craig Taborn’s piano and the ingenious and sensitive drumming of Gerald Cleaver. This instrumentation imbues the repertoire with a disarming simplicity that can only be borne out of sophistication. 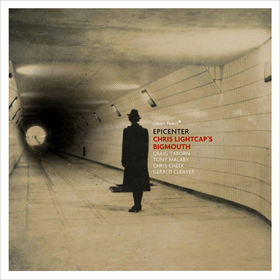 You’ll notice, for instance, the subtle yet palpable tension and interplay between the saxophones; a tension and release in the inflections and accents of Nine South, White Horse and Epicenter and the flexible advantages of employing the tenors in the playing of almost every other piece in Bigmouth’s songbook on the record. The outstanding renditions of Arthur Avenue and All of Tomorrow’s Parties boast many impressive moments from the suavely dispatched gravitas of the bass soli to the spacious, slightly disembodied sonorities of the saxophones and the keyboards. Both Craig Taborn and Gerald Cleaver have obviously invested a good deal of thought and practice time into the music of Down East and Stillwell, and it shows in the pouncing on the sudden loud declamations and dives into the wild scales (Taborn) truly evoking the music’s improvisatory genesis.

By contrast, Chris Lightcap’s engagingly taut and headlong pursuit of adventure in all of his work zeros in on his attention to individual variations and improvisations, revealing his fondness for expressive asides in the form of rubato,tenutos and rounding off phrases at the end of major sections in the songs. He especially gilds Stone by Stone’s melodic inventions , while his soft-grained broken octaves downplay the urgency of Stillwell’s unexpected reharmonisation of them, which the rest of the ensemble – especially Craig Taborn – brilliantly underlines by slightly accelerating the basic tempo. All the while the chart features alluring echoing effects and a cheeky double-note cadenza right in the middle of the piece. Elsewhere, in All of Tomorrow’s Parties a playful jazzy lightness contrasts with Chris Lightcap’s surging drive.

Magically, thicker passages in the music gain definition with ambient resonance primarily because of Craig Taborn. And Gerald Cleaver is thunderously brilliant throughout. And while it is impossible to ignore the stellar contributions of the two tenor saxophonists in shaping the melodic content of the music Mr. Lightcap steers his ensemble like the master of the ship with inspired confidence.