The guitar-playing Chris Cortez is a headline act no matter what he is doing – as an advocate for making music accessible to anyone who wishes to play or enjoy it, as a label owner engaged in producing and disseminating music and as a musician who also happens to be a virtuoso guitarist. All his personas come together in a proverbial perfect storm on this live album which is recorded with a group of like-minded musicians at Blue Bamboo, a performing arts venue that Mr Cortez founded and developed into a shrine for musicians to create and celebrate their art with the faithful who share in the experience. 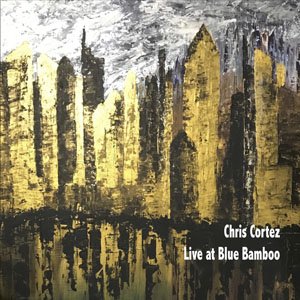 The album Live at Blue Bamboo marks Mr Cortez’s return to the stage for what turned out to be an hour-and-a half’s worth of a wonderful engagement between like-minded musicians fully attuned to artistic vision of the guitarist. Nine works by Mr Cortez comprise the record of what seems to be – episode after episode – one of the most purely affecting concerts of the musicians’ professional lives. Mr Cortez leads a group of accomplished instrumentalists – including saxophonist Jeff Rupert, trumpeter John DePaola and flutist Dan Jordan, together with a rhythm section that includes pianist Bob Thornton, bassists Ron Jenkins and Doug Mathews, and drummers Joel Rosenblatt and Jeff Sipe.

Each musician make the music tumble and dance with rippling, jazzy grooves, at the same time making the songs and glow with a mulled spice warmth. Each soars in the time given him to stretch and solo before returning to the waiting ensemble. Mr Cortez soars if not highest of all then he certainly takes the music to a pinnacle to which it was always meant to ascend. All the while he moulds phrases, nudges details to the fore, bends the line, holds tight to a salient accompanying detail [especially along the lower end of the spectrum, all the while responding almost subliminally to the ensemble’s characterful playing.

Meanwhile the ensemble responds to Mr Cortez – as it does to every soloist with elegant mobility, responding to each turn of phrase with loving attention, relishing the momentum of the music with every crescendo and diminuendo creating magical fallout – this is true in the frenetic racing of faster paced pieces such as That’s the Way of the World and odd-metre ones such as Different Strokes, as well as more stately pieces such as the ballad Melody Makes it Happen, in which taut rhythms and a sense of balletic engagement bring nobility to the work.

You won’t hear audiences roaring their appreciation for these works, but it’s impossible to believe that they didn’t do so. This music must certainly have brought genuine rapture as to an audience bowled over and ablaze with joy at this fine quality and vivid nature of each and every piece – especially to the splendid rendition of A Remark You Made heard here in the solitary spendour of Mr Cortez’s acoustic guitar.