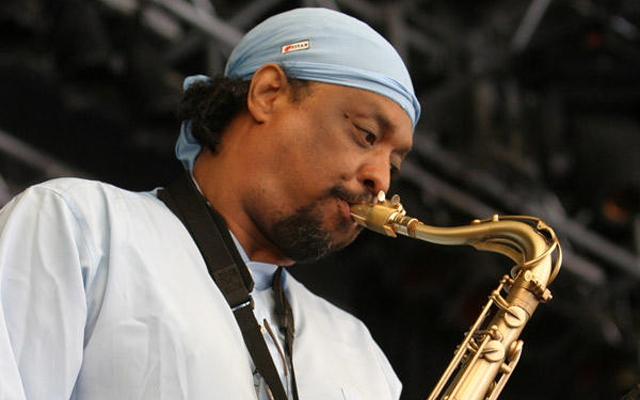 Chico Freeman’s swings sassy and hard, and yet the tone and manner of his playing gets so mystical in slower movements of his pieces that you can feel that he has entered into the realm of the Divine. This is nothing new. I have a vivid memory of his 1979 India Navigation vinyl Spirit Sensitive with a mighty band that included Cecil McBee, John Hicks, Billy Hart , Don Moye and Jay Hoggard that was both magical and supernatural and drove me, like many others, I’m sure, to ecstasy. And that was not all; Sweet Explosion (In+Out, 1990) was no less heady and numinous. Having ‘descended’ directly from the line that produced not only his father, Von Freeman but John Coltrane, this might come as no surprise. However Freeman has, for years, been a singular voice, a struggler in the desert lit by a fiercely glowing sun. 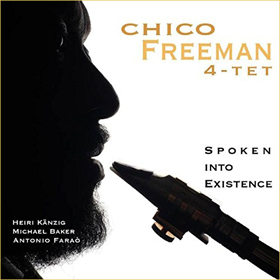 Spoken Into Existence is more than a Holy Communion with the spirits up above. Chico Freeman plays his heart out on the path that takes him there. You rarely hear a voice that is born of such feeling and emotion, such sensuality as to caress each note as if he were drawing the line of a human body. This comes from having a natural rapport with the instrument, which, in turn enables him to take on a ballad and imbue it with the sheen of glorious almost ‘string’ tine. Listen for the tiny murmurs of his soprano saxophone on ‘N’tiana’s Dream’ one of five elegiac pieces he has written for each of his daughters. His notes describe his feelings of love for his children, but none of the words can capture the sense of heartfelt beauty of that relationship better than the music.

There is, of course, a lot more going on here. Freeman is not all softness and balladry. His murmuring saxophone is put to the grind as he shouts the blues on Stanley Turrentine’s ‘Soft Pedal Blues’ and he wails mightily on Antonio Faraò’s ‘Black Inside’ a dark and melancholic piece that appears to have been written in a shadowy, crepuscular mood. Freeman also swings ebulliently. This is something that he does from the get go as he leaps out of the gate playing Victor Feldman’s ‘Seven Steps to Heaven’. This piece is a lovely arrangement – not quite as clipped as the one Miles Davis played on his album of the same name – but reverent and freely interpreted at the same time.

Clearly Chico Freeman belongs to ‘the tradition’. But he also makes things new as did the best of the preceding generation and his as well. HIS compositions come from a very different end of the musical spectrum, one where the great Ben Webster and Gene ‘Jug’ Ammons once held sway. Today, it’s Freeman-time and his formidable command of the textures and timbre of the tenor (and soprano) saxophones give him the explosive whimsy that he uses to light up his music with the joyous evocation of spring. That together with his über-inventiveness of the ballad enables him to reign supreme in a cluttered world of largely under-achieving musicians. Not to be forgotten are the rest of the members of this fine band: Swiss bassist Heiri Känzig together with the rest of Freeman’s elegant rhythm section including pianist Antonio Faraò and drummer Michael Baker. Their contribution is invaluable to yet another unforgettable Chico Freeman album.