Chick Corea has – probably more than any other contemporary musician, bar none – has had a most profound impact [more than music itself] on the very lives of musicians. In his short booklet note by John McLaughlin – augmenting the one written by Wulf Müller, both notes accompanying Chick Corea: The Montreux Years – puts it ever so aptly when he says: “To write about Chick Corea is to write about someone who changed my life.” Mr McLaughlin puts it down to “true friendship” and [Mr Corea’s] being “one of the greatest musicians” he has ever “had the pleasure of working with.” Mr McLaughlin should know; his relationship with the pianist lasted 50 years. 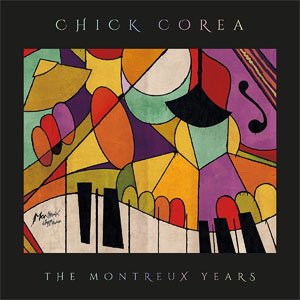 Few musicians engaged with audiences and was as empathetic [as indeed the audiences were to him] than Chick Corea. This is borne out by the fact that Mr Corea returned to the Montreux Jazz Festival, curated by the legendary founder Claude Nobs more times than most musicians; his first appearance being in 1972 with the Stan Getz Quartet. One can only imagine that must have put the producers of this record in when gathering repertoire for it. How do you compress half a century of performances into an hour and then-some of runtime on a compact disc? Even focusing on the past 34 years – and five [or six] ensembles that Mr Corea led, you’d still have to have had agonised over what to put in and what to leave out. Even if you focus on originals, you’d be on the losing end of the scorecard [sort of…]

However, the producers have won the proverbial battle of production – if by a slim margin. And here’s why. You simply cannot go wrong with Chick Corea and his music. All you have to do is be inclusive. Each of Mr Corea’s pieces stands alone – on its own, whether played in solitary splendour, or with a group of musicians on whom he had that proverbial, profound effect. Each is music in which nothing can be omitted, not a single turn of melody, not a single modulation. When Mr Corea sits down at the piano and plays – especially as he does here to appreciative audiences – he pays the strictest attention to every detail of expression, a fine, but not over-refined execution of each individual intonation [cue Interlude with the Chick Corea Elektric Band].

Everywhere on this album there is a very real – almost prescient – sense that the responses of Mr Corea and the performing musicians come from deep within the music’s substance. Music is not merely played; musicians and music are in deep embrace, that too in such a manner as to show that the personalities of the performers do not obtrude in any way as the music shines on its own. Perhaps this is one of the ways in which Mr Corea influenced every musician whose path he crossed; and performed with. He taught them unobtrusively to simply get out of the music and simply play from the heart while listening to its heart-beat – or as enshrined in a song by Dizzy Gillespie: Con Alma.

This is, indeed, how each of the eight songs on this album sound, the performers giving it their heart and soul – their individuality of expression securely enshrined, defined and projected in music that flies off  the staved paper into the rarefied air of the Montreux soundstage. Not unpredictably every song is warmly received by the awe-struck audiences. Meanwhile Mr Corea inhabits the pieces from the inside out, wearing his heart on his sleeve and, at the same time welcoming each of the musicians he plays with to journey with him into the heart of melody, harmony and rhythm, from there to issue the thought-provoking interpretations captured on this record.

Through it all Mr Corea reigns supreme. He plays with sublime ease and almost insolent virtuosity showing himself to be an indelible part of the musical continuum – together with Chopin, Scarlatti, Mozart, Scriabin, Bartók and Henri Dutilleux – musicians whom he loved and often channeled whenever he sat at the piano. Thorough it all Mr Corea’s pianism has sequences of ethereal chords in the upper register while sending the slender fingers scurrying up and down the keyboard in gusty shadows [cue Dignity by the Chick Corea New Trio and New Waltz by the Chick Corea Quartet – anything on here really] in the upper register. On New Waltz the misty atmosphere of the opening andante assai-like pace is given a spritely fillip as the pianist eases the melody into the mid-section of the piece, where further definition whereby the harmony and rhythm is propelled by dissonance and drive until the work is transformed by the otherworldly weightlessness of the saxophone, played by Bob Berg, as Mr Corea hovers hauntingly on the edge of inaudibility.

To be sure, a luminous lyricism – one of the many hallmarks of Mr Corea’s music – is maintained by everywhere and from end to end all of the musicians [no matter who it is who is playing on  which piece]. It almost feels as if each of the performers – completely attuned to Mr Corea’s vision and artistry – is mesmerised by that quality of lyricism which the pianist enshrines in his compositions and infused into the melodies, harmonies and rhythm that he brings to life when he plays along with them. As a result there is also a dream-like, sometimes passionate, sometimes rarefied impulse that each musician conveys with exactly the penetrating insight envisioned and executed by Mr Corea; an insight that is manifest throughout this remarkable disc.