In the two-and-some decades, Charlie Dennard appears to have “done it all” from studying with Elis Marsalis in New Orleans to performing with some of its favourite sons – Kermit Ruffins, Nancy King, Charles and Ian Neville, George Porter, Stanton Moore, Delfeyo Marsalis, Nicholas Payton… and a proverbial list as long as your arm. He has also performed with Mike Keneally – a one-time acolyte of Frank Zappa and the Birmingham Metropolitan Orchestra, and he was Music Director with Cirque du Soleil, Canada’s iconic avant-garde stage company with whom he toured 12 countries and played 1,700 shows. If you think that’s an impressive résumé, consider this: 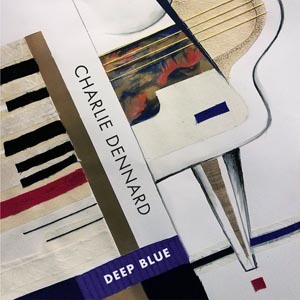 After serving the roots of Jazz for decades, Mr Dennard has decided to return to New Orleans, it’s not-so-anecdotal “world capital” and has been behind a highly regarded organ trio. So perhaps it was only a matter of time when he would return to his “first” instrument – the piano and release an (essentially) trio album entitled Deep Blue with which he doffs his proverbial hat to the kind of music that New Orleans first gave the world. The result is repertoire that is simply gorgeous; music that is full of harmonic invention, surprising twists , intricate sharing of details between Mr Dennard, his trio of bassist Mike Moran and drummer Doug Belote (bolstered on four of seven tracks by reeds, horns guitar and percussion).

Dramatic quick tempo pieces such as the opener, “St Charles Strut” give way to atmospheric slow pieces (“Wanderlust”), works which highlight Mr Dennard’s accomplished mastery of contrapuntal ideas and idiomatic writing for all the instruments from top to bottom (especially “Mojave” and “Father”). For his part, Mr Dennard feeds off the harmonic basis for his elegant, ingenious ramblings, returning to one exquisite melody after another with unadorned, yet rhapsodic ease. To my mind the Gospel fervour of “Father” alone is worth the whole album. However, there is the fact that we get this last song after a slew of great work that took out breath away through the half an hour or so of music that came before…

Mr Dennard playing is deeply meditative throughout (but especially on “Father”), which means that he is thoughtful, though never mushy, emotive though never sentimental, always drawing from a wide palette of colours, and when he switches from piano to organ or introduces radiant fills from his keyboards he makes the music ascend to a rarefied realm to which all of this music really belongs.