Of course, those discs are just a smattering of many more that have been released by Canadian artists in North America. Tara Kannangara (Some Version of the Truth is featured elsewhere in this issue) and Brandi Disterheft (Blue Canvas not reviewed in this issue) are others among a slew of significant recordings by Canadians playing every style of music have been released. Here are some of them:

CounterMeasure
Made to Measure
Independent 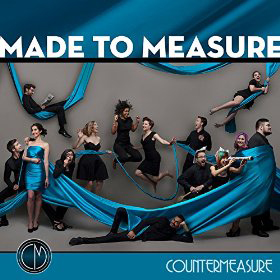 This CD ought to be viewed as one of the most valuable additions to vocal a cappella repertory. CounterMeasure presents vocal harmony in a pristine incarnation by fourteen singers who can make any note hummed, whistled, scatted and sung come alive – as if by magic – with exceptional finesse and urgency. Think Singers Unlimited, The Swingle Singers, and The New York Voices on a collision course with Lambert, Hendricks and Ross, The Manhattan Transfer and Take 6… and then think again. This vocal consort brings to the ten pieces on this recording a priceless musical language that ranges far beyond the familiar. Everything on the recording seizes the ear with fresh and noble discernment. Sopranos and mezzos are profoundly beautiful and evocative; countertenors, tenors, baritones and basses are deep and emphatic. Together the group creates choral textures and adventurous harmonies, worthy of anyone of the aforementioned groups and then some. Each song is a master-class in the art of vocalastics. The vocal performances could hardly be more captivating than on Billy Strayhorn’s ‘Take the A Train’ and the Beatles’ ‘I Saw Her Standing There’; each is a silken account of how a memorable original could be made impossibly more memorable. And every other song is filled with gleaming contributions from the singers, who take up their harmonic assignments or melding of faux-instrumental and interweaving voices in ensemble pieces with a sophistication that hasn’t been heard in a very long time. Just as electrifying is the quality of this recording. 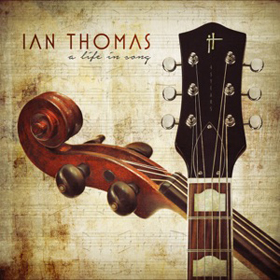 As far as one can tell, in a world dominated by dubious musical talent, Ian Thomas’ sublime recording seems not to have attracted as much attention as it deserves, which is a great pity. However a performance this good will not have to wait much longer. Canadian audiences with a sense of history will remember Ian Thomas as one of the charter members of a group called The Boomers, a band that also included the producer, arranger (one of six others), orchestrator, conductor and even bassist – Peter Cardinali. What many listeners – even the more astute ones – may not know is that Thomas’ songs have been performed by Santana, America and Manfred Mann. But if you forget, you might be forgiven if only for one reason: no one has performed this repertoire better than Ian Thomas. Of course he would, one might say; he wrote them. Who else could perform them with such intimacy, poise, natural and yearning expressiveness in which supple and stylish singing are backed up by a gorgeous combination of sweetly tuned strings and eloquent brass and winds. I’m not sure that I’ve heard an Ian Thomas disc that comes close to the spine-tingling thrill of this performance, extorted, no doubt by Cardinali’s gentle, yet firm hand. But make no mistake; this is Ian Thomas’ record, one that showcases the minutiae of vocal dexterity to a responsive and wonderfully mature orchestral sound, once again captured with intimate detail by John ‘Beetle’ Bailey at his legendary Drive Shed. 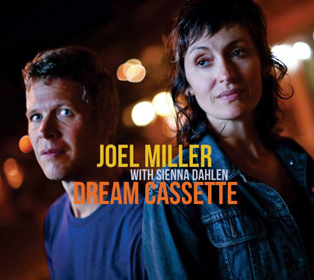 The title of this recording is interesting in the whimsical images it conjures up, none more vivid than a journey back to musical traditions that are a molten mix of styles and cultures that can only come from a Canadian landscape. But more than anything else this is a product of the prodigiously talented musical polymath, Joel Miller. In each one of twelve originals Miller has tempered his arsenal of sophisticated compositional resources with fond and haunting reminiscences reflecting the contours of New Brunswick’s rich and yet starkly dramatic cultural landscape. The mostly unfamiliar tunes serve as unifying devices which in the hands of Joel Miller and vocalist Sienna Dahlen, together with a crack ensemble that elevates their intentions by deconstructing in a variety of unexpected ways and gorgeous timbres. Songs such as ‘Flying Dream’ and ‘Corey Heart’ are densely evocative and hypnotic musical embroideries while the audacious ‘Streamlined’ is at once raucous and poignantly eloquent. There is a wonderfully kaleidoscopic palette of ‘vocal’ colours of Miller’s saxophones throughout, with plenty of sonorous bloom for those lonesome notes. Sienna Dahlen brings an ethereal beauty to this recording as she sings gloriously, rising fluently to the majestic melodic lines of Joel Miller’s music. 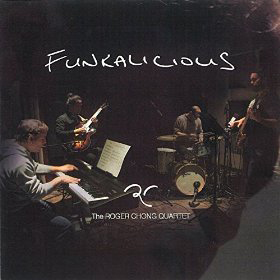 None of the pieces here bears the title ‘Jeux d’ éte’ but there is summery warmth running through this programme. Roger Chong is an über-virtuosic guitarist and together with his quartet he fosters music that is typical of music with a funky perkiness and a fluent lyricism, all played here with the finesse and vitality that have become the hallmarks of Chong’s libertarian musicianship. Some might find it hard to get over-excited by this repertoire, but Roger Chong’s excellent playing here is bluesy, excellent, well-balanced and full of character. His quartet provides just the right boost of ebullience and elegance. The repertoire on this album – a sequence of miniatures refract the norms of Chong’s new music through a harmonic prism and are at once brilliantly conceived and immediate in their impact. ‘Walking the Dog’ and ‘Playing With The Duke’ are classics of the funk genre and are written with terrific command of the various instruments’ potential realms of technical polish, spectrum of colour and mix of timbres, to which Chong and his band of merry men respond with élan.