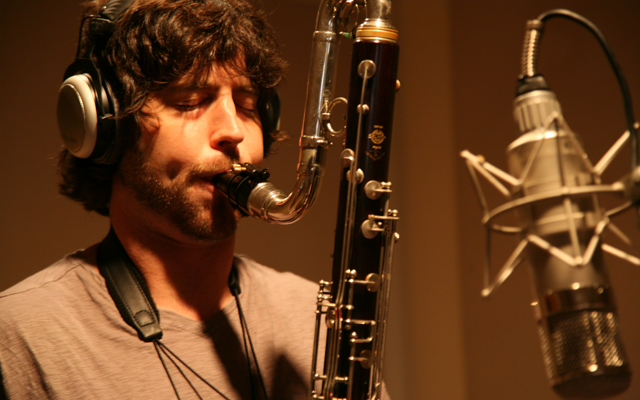 Although it has been featured in a small amount of repertoire including music by Richard Strauss, Charles Ives, George Gershwin, Krzysztof Penderecki, Béla Bartók and Philip Glass – the latter even dedicated a concerto to it – the baritone saxophone probably has somewhat less music lavished upon it than even the bassoon. So Generations a disc by Brian Landrus that is centred on the concerto virtually composed around the deep ends of the baritone saxophone – supported also by Mr Landrus’ bass clarinet, as well as tuba, bassoon, contrabassoon and trombone – speaks to the composer’s intent to produce something with an aural as well as emotional gravitas. Surely this must count as a musical milestone?

Brian Landrus tells us in his notes that inspiration for its naming and dedication is twofold: the first from an early idol, Gerry Mulligan, who wrote the iconic tune of the same name and recorded an album of the same name as well, and the second is the joyful birth of his (Landrus’) son, whom he named ‘Jeru’. Joyous emotions are set aflutter by Jamie Baum’s flute (and Tom Christensen’s, if he plays it during the movements of the concerto); 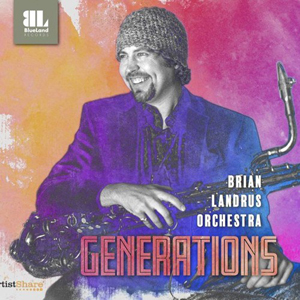 however celebrations are more measured and when they are allowed to cut loose as in the fourth movement of the concerto they are almost heraldic – timed as it were for when messengers must have brought news of the birth of Landrus’ son.

Appropriately, then, the “Jeru Concerto” is Brian Landrus’ preoccupation with memory, combined with his obvious passion for creating glittering, lush musical textures by means of a large ensemble. Here too is an orchestral work that often seems to evoke a landscape redolent of dreams. Moreover, in the thematic idea of Generations there is a distinct feeling of circulatory to it, as if the startling instrumental gestures and musical arguments always take you back to the same place, to the ‘source of all beginning’; namely to ‘birth’. However, in keeping with the existential element of mystery of life itself, this work by Brian Landrus has the composer resolving the music’s necessary ‘disorienting’ qualities (that describe life’s mysteries) in the fourth movement where he all but replaces relatively stable tonal with a somewhat ambiguous-sounding chord, thereby emphasizing the questioning quality of the music. The glorious “Jeru Concerto” is the also centerpiece of seven other pieces, each work of art created on one palette more richly sonorous than the next and all abounding in luminous and sensuous timbres.

The beauty of “Orchid” is highlighted by Brandee Younger’s harp, which provides a magnificent foil for Mr Landrus’ bass clarinet. “The Warrior” features the power and beauty of Joe Locke’s vibraphone, great flights from Mark Feldman’s violin entwined in the lofty wail of Igmar Thomas’ trumpet all melded together by Brian Landrus on baritone saxophone. “Arrow in the Night” is somber, almost sinister, and is appropriately traversed by Brian Landrus alone with his baritone saxophone. The ebullience of “Arise” resounds once again with heraldic calls from the orchestra. “Human Nature” is appropriately mysterious and “Ruby” (named after Landrus’ delightful daughter) returns the music to its proverbial high point in the rhythmic buoyancy and contrapuntal vigour of its instrumentalists – both including exquisite by Jamie Baum, Tom Christiansen, Ralph Alessi, Joe Locke, Mark Feldman and Brian Landrus, who owns this recording from end to end.