This BK Trio recording, Hit It looks like an “organ-trio” recording until you actually listen to it. It does feature the three instruments – Hammond B3 organ, guitar and drums – key ingredients for the proverbial organ trio, but because the date is marked by Brian Kooken’s elegant guitar lines and crackling rhythmic vamps and harmonic lines it becomes quiet unusual, and despite the fact that the organ plays a near co-equal role in this music everything about it manages to flip the script. 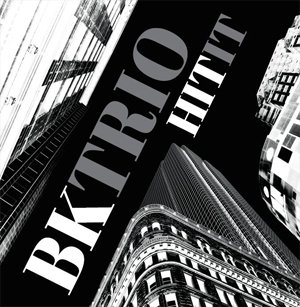 So instead of being swept away by streams of gurgling and wheezing “organisms” you are riveted by the translucent elegance of Brian Kooken’s guitar. This doesn’t simply make the music refreshing, it makes the whole experience of this trio’s repertoire quite memorable. Each of the pieces develops from a beguiling, elegant melody. What makes them so special is that all of the musicians take turns to add to the elegance and beauty of melody, harmony and rhythm. These sonic creations explode with invention from Mr Kooken’s guitar and then soar even higher into an elevated realm with magisterial improvisations by organist Greg Hatza and drummer Robert Shahid.

Some, like “It’s Monday and I’ve Got the Blues”, arise out of the ubiquitous Black America Blues idiom and receive particularly fervent treatment from Mr Kooken who streams into the music shortly after it is introduced by the organist. Its muscularity creates a vivid mental picture of the bluesy brotherhood that inspired generations of musicians to pay tribute to this historic musical style. Mr Kooken is at his best here and his gut-wrenching imagery is exquisitely affecting.

Mr Kooken’s fingers fly across the fret-board on “In that Funk Again” and on “Soul for Shahid” as well. It is also fascinating to listen to how the drummer Mr Shahid and Mr Hatza react and complement the gutsy guitar work with vibrant and emotive harmonics and tumbling rhythmic grooves. It’s a fascinating and rewarding musical experience.