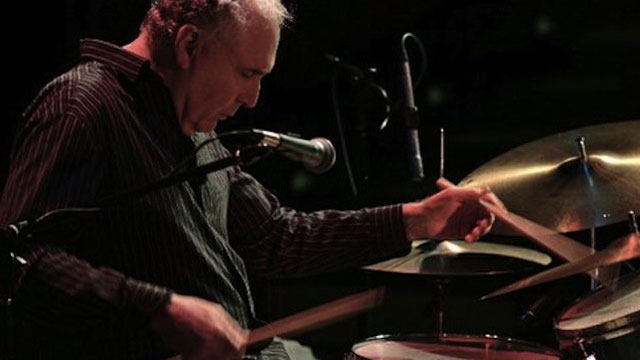 A wonderful tensile energy operates on a subliminal aural screen behind the main episodes in New York-based drummer Billy Mintz’s music. Perhaps they are particle accelerations of unabashed oscillations of woodwinds and brass, or the visceral growling of the two basses; perhaps they are a bit of both as the sonic boom ignites and shatters the calm of the sanctuary. There might also be particle traces on the ghost dancers and the curves of song in the composer’s work here, Surely all of this might qualify the composer as flirting with the ignition point of it all. In fact Mr. Mintz turns out to be a highly effective composer of contemporary music by virtue of a vivid aural imagination whose ingenious, garrulous products he crafts into absorbing chamber soundscapes that make the hip 2 Bass Band sound just great. 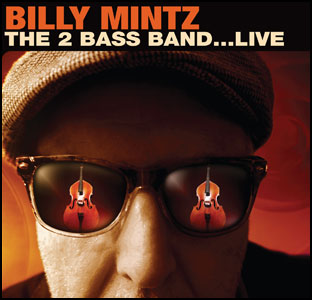 It could easily be assumed, without being risqué, that Billy Mintz counts Sibelius, late Mozart, Webern, Schoenberg; even Copeland and of course Gill Evans and George Russell among his influences. A word of caution here. If one hears echoes of their music among others, it is probably because he has learned much from their passion and their skill, and not necessarily from their content. In truth, however, his musical language is his own. It can flare up wild and romantic, but at other times, as in “Ghost Sanctuary” and “The Dream” it is profound and heraldic and dusted with hints of the late Russian music of Prokofiev. And then there is the comic-book scurrying around that reminds me of Busby Berkley, in a slightly more serious and ingenuous way. I must pay homage here to the two basses in question, especially my favourite one, Cameron Brown, who has delighted me with his genius in ensembles with Archie Shepp and Beaver Harris and in the iconic duo settings with Sheila Jordan. You can pick him out in a flash if you have walked in his shadow before.

Billy Mintz is a veritable painter, a percussion colourist who wields his palette of a myriad of colours with ingenuity and impressive ease. He is as prototypical as Jackson Pollock and Robert Rauschenberg and moves with impressive ease between the flatted fifths of “Dit” and the denser territories of “The Dream”, between the earthy undulations of “Shmear” and the interstellar wanderings of “Darkland”. Wherever you look and wherever the drummer roams his woodwinds and brass and the ever-present two basses provide the foundations for the drummer’s flights of fancy. The players’ soli are spectacular to a man. The performances of every member of the 2 Bass Band is more than authoritative. Mr. Mintz’s music often has an off-kilter attitude which suits the orchestra’s own cool Gil Evans-influenced sensibilities; they react quickly to Mr. Mintz’s sometimes audacious shifts in mood and get to display their very outstanding chops.

Billy Mintz was born in Queens, New York. By the age of 15 he was playing in the show bands of the Catskill Mountain resorts developing his musicianship. In his twenties, while living in New York City, he played and recorded with the Lee Konitz Nonet (1978), Kundalini with Perry Robinson and Badal Roy, the Eddie Daniels Quartet, Gloria Gaynor, the Steve Tintweiss Quartet, and the Harold Danko Quartet. In 1981 Mr. Mintz relocated to Los Angeles where he was a member of the Mike Garson Trio with Stanley Clarke; the Kim Richmond Sextet; the Bobby Shew Quintet, the Joey Sellers’ Jazz Aggregation, and the Vinny Golia Quartet. He also performed several times with the Mose Allison Trio and with Mark Murphy, and did a stint with the Merv Griffin Show band. Read more…