To the extent that Betty Carter is firmly entrenched in the upper echelons of the Jazz – indeed the music – continuum, critics have at some point or other judged her extremely unfairly and the reason this is so is that most critics, especially white ones, seem to have an assembly line approach to writing about music – especially about Jazz. This is exacerbated by the fact that most (white) critics are also male and unable to truly understand and feel where black musicians – especially women –come from. This latter fact compounded by the (formerly mentioned) approach to writing about music. As a result, a true original and magical voice artist such as Miss Carter has been disparaged and would have been almost completely forgotten were it not for someone like Cassandra Wilson, who has directly descended (artistically-speaking) from Miss Carter, whose music on this disc comprising thirteen hitherto unreleased songs is an enormous delight. 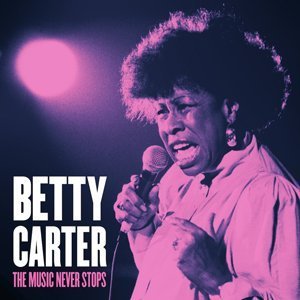 Miss Carter is unique. Her voice is not simply smoky, and she wields it not just like an instrument, but can use it like almost every kind of instrument. For instance, think stringed instrument and Miss Carter has the range and manner of conveying emotion that makes lyrics sound as if they were played con arco by anything from a violin to a contrabass. She can also whip words around to convey a kind of pizzicato manner that no other vocalist can. Think horns and Miss Carter can deliver a line as if it were played by a woodwind, or brass; even a reed instrument. When fully immersed in the moment she can drop a depth bomb as if, with a word, she had just hit the bass drum, or deliver a phrase fast and furious as if it were a tattoo on a snare, a tom-tom, complete with bright splashing accents as if a cymbal had been caressed or smashed. In ballads – and we have one of the most smoky, classic and moody ones in “Moonlight in Vermont” Miss Carter can conjure a dazzling arpeggio.

The real treat is how Miss Carter’s traversal of the registers with what is closest to coloratura in Jazz using her characteristically agile, raw-silk-textured voice artistry to tell stories like no other vocalist in the whole of Jazz – past or present. She is unique in a world we seem to only remember as once being inhabited by Ella Fitzgerald, or Sarah Vaughan, Billie Holiday, Abbey Lincoln, Jeanne Lee and Sheila Jordan. But she is nothing like them. Miss Carter is cut directly from the fabric that describes the rip and tear and pain of living; as much as she is cut from its ebullient whoosh of joyousness. She reveals this in an instrument that is and was always gorgeous: lustrous, precise and sharp as a whip-crack. Her musicianship is fierce as she digs into the expression of each word, brings ceaseless variety to soft dynamics (often wordless), and gives grace to every phrase.

How wonderfully appropriate for this album to be entitled The Music Never Stops. Throughout Miss Carter is dazzling and always gives notice that she needs no accompaniment because she could – on a dime – supplant every instrument in the string section, the big band or the small ensembles. Fortuitously, however, they are all there with her, along for the memorable ride. The version of “Frenesi” is a case in point as far as big bands are concerned where Miss Carter is explosive. The pianists – Cyrus Chestnut, John Hicks and Geri Allen – are superb as are the bassists Lisle Atkinson and Ariel Roland, and the drummers, Clarence Penn and Greg Hutchinson… and every other instrumentalist who plays behind Her Majesty. Each one is fully attuned to the vision and artistry of one of the greatest voice artists as she sculpts each phrase and teases out the long inventions of lines (in “Bridges” for instance), giving new meaning and deep emotion to each song like no one but Betty Carter can and ever did and like no one has done since.