Home Music Bernie Worrell, Bill Laswell, Karsh Kale: Funkronomic
Give a musician a keyboard and he becomes a keyboardist. But give Bernie Worrell a keyboard and he becomes anointed as its patron saint. If in the Roman Catholic realm, two proven miracles are required to make this so, then Bernie Worrell gave us a myriad of these when he were alive and just before his untimely death on June, 21, 2016, five more tracks on an short album Funkronomic released on the Incunabula Series of Bill Laswell’s M.O.D. Technologies. The music, though not all written by Bernie Worrell certainly has his stamp on it: inexorable momentum born of fervent authority, a virtuosity of combined effects without gratuitous excess. Of Bill Laswell much has already been said, but often we forget that of all the current doyens of the electric bass, few are like Laswell, who knows no limits to exploration. Something similar might also be said of Karsh Kale, perhaps less known than Worrell and Laswell, but no less a master musician than any percussion colourist playing today. 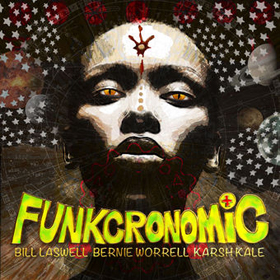 If one’s reflexive default at the prospect of a trio recording – even an exquisitely curated one as this, another trio recording – is one of dispassionate or nonchalant resistance, this recording is as likely to turn ears as any ever made. Along the way, in a deftly balanced presentation of strikingly contrasted musical essays Worrell, Laswell and Kale offer beautifully turned, reflective and buoyant readings of sui generis trio works. ‘Woo Doo’ and ‘Outer Woo’ named after Bernie Worrell, whose alter ego from his early playing days was The Wizard of Woo, are exquisite musette-like works, which trip along in a manner that came to be called ‘funky’ thanks in part to the regeneration of the word by Worrell. The former opens the recording and it skilfully prepares the way for what is to follow.

The seasoned reflective qualities of Bernie Worrell are heard to such memorable effect that we are reawakened in the stunningly-voiced combinations of sounds that proceed from there. Unusual here, also, is the fact that Karsh Kale is heard on the conventional drum set, rather than on the Indian tabla that he had come to so well known for. Hardly unusual, however, is how the judicious alchemy of the musicians’ perceptions adds monumental architecture and colour to mesmerising effect on each of the pieces on this rather short programme. Not surprisingly, also, is how the intertwining lines of keyboard, bass and drums become the basis for new beguiling music with its supra-polyphonic interpolations. This record will, fortunately or unfortunately, be remembered as perhaps the last of Bernie Worrell’s recordings. If so, let it be so. Worrell’s performance will persuade you that unsurpassed technique never obfuscates the essence of music. This is true of Laswell and Kale as well for each of them has communicated no less effectively to the making of another fine record. Still it is only fitting that this recording serves as a requiem for one of the icons of music: Bernie Worrell.