Home Music Behn Gillece: Walk of Fire
Sometimes you can tell that a musician is ‘well on his way’ – perhaps has even ‘arrived’ – when he is comfortable enough to play with a large-ish ensemble. Or put another way often a young musician feels safer when playing with a small group (a trio or quartet), conventions which allow him to slip in and out of the music without making too many waves. Thus to tuck himself inside a sextet or septet (or larger ensemble) and add himself to a veritable ocean of sound that has been created on Walk of Fire is a sign that Behn Gillece is not simply comfortable in his own skin, but also ready to serve notice – and be noticed (for) – of his rapidly maturing skills as a writer and instrumentalist. It is therefore no longer time to be calling Behn Gillece ‘a talent deserving wider recognition’, but to recognise him as the real deal – both as a composer and arranger, and a vibraphonist as well.

There is, indeed, a fire burning here. It is a rather big and almost a proverbial ‘burning bush’ in which Behn Gillece occupies the bluest part of the flame. This means that his music is very hot to touch. Here is a writer whose idiomatic turn of phrase is based on some concrete imagery: the dark growl of a bear, for instance, beautifully enunciated by Walt Weiskopf, responded to with smarmy sardonicism and buttery smears by Michael Dease on trombone on “Walk of Fire”. And yet that same trombone might also sometimes hiss its way through the swooping, howling trumpet played by Bruce Harris on “Battering Ram”. 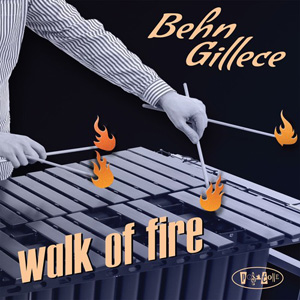 But horns aside Adam Birnbaum’s piano and the vibraphone of Behn Gillece himself might sound like the sprinkling of so much stardust on “Reflective Current” and, again, on “Celestial Things”.

Meanwhile you will be quite surprised at how unobtrusive the vibraphone sounds throughout. And yet it is always there, quietly self-assured and played without so much as a crackle on “Walk of Fire” or “Specter”; or everywhere else that Behn Gillece is heard soloing for a few bars – just enough to create that brilliant glow in which everyone can bask. These ten gleaming gems are also beautiful vehicles for Clovis Nicolas, a bassist who, like Mr Gillece, is never showy, but always there, ‘in the pocket’ when each soloist returns no matter where or how far he’d been. Keeping it all in time is also Jason Tiemann, a drummer who comes to this bonfire more with a palette into which he dips brushes, sticks and mallets just like a bold percussion colourist would. Together these men make Walk of Fire an album to die for.