There is a hive of atomic activity and it is palpable no sooner the music on Testament by the Avram Fefer Quartet begins. It’s almost a form of nuclear fusion is taking place – only this time it’s musical; certainly not any other kind that has a kind of doomsday connotation, but a hugely constructive one and here’s why:

What we witness is the coming together of atomic nuclei – in this case of the four musicians – which are combined to form one or more different atomic nuclei and subatomic particles. Mr Fefer, Eric Revis, Chad Taylor and Marc Ribot are nothing but the embodiment of neutrons or protons reacting to the music of each other. The difference in mass between the reactants and the musical products is manifested as either the release or absorption of energy. Science tells us that this difference in mass arises due to the difference in atomic “binding energy” between the atomic nuclei before and after the reaction. And so it is when these musicians combine. Their fusion is the process that powers active or “main sequence” of the music – just as it does stars, or other high magnitude stars. 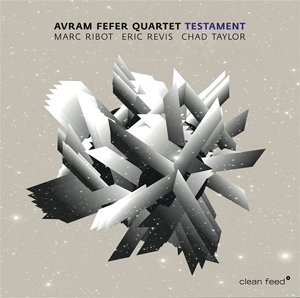 You might be reminded – at the onset of the music – that a “testament” is “a tangible tribute” or even “an expression of conviction; a creed”… and you might be exactly right for it feels as if Mr Fefer is affirming his expressing a musical conviction or stating his own creed in the strongest possible terms. He does this firstly by his extremely muscular tone and forthright manner of playing – whether on tenor or alto saxophone. Dissonance – when used – is sparingly and discreetly stated and intelligently woven into the fabric of the dense yet translucent sound of music. I am reminded of Ornette Coleman although – to be fair – Mr Fefer’s musical voice is quite distinct: fleshier as opposed to Mr Coleman’s which is more metallic. So the comparison, if at all, ends with a kindred harmolodic spirit – and that too, only barely suggested now and then.

The presence of Marc Ribot in the group – and his manner of making music with a kind of urgency here – makes for an interesting sound palette. The elliptical nature of the contrapuntal conversations between Mr Fefer and Mr Ribot often has a feeling of taking place on a rarefied realm as the Mr Ribot’s twangy voice and Mr Fefer’s (often) loping lines in the upper register makes for a musical “shout” that is high and lonesome. The music of “Testament” is a superb example of this as is that on “Wishful Thinking”. The incessant rumble of Mr Revis’ contrabass and the rolling thunder of Mr Taylor’s drums add to the nervous energy that keeps fueling the musical heat.

Deeply felt emotional feelings from all the musicians drives this music including that of Chad Taylor’s exquisite “Song For Dyani” and the saxophonist’s own über-mesmerising “Essaouira”. The sense of this music being Afri-centric and – in particular being propelled by the Gnawa healing spirit rings true and eminently clearly throughout this music (and not only because of the two songs in question. Mr Fefer displays a sense of being aligned with the plight of all of humanity in his music. This is what also makes him a riveting storyteller and a musical sketch-artist and is why this music is so compelling. The profoundly meditative music of “Essouira”, for instance, sends a clear message of that not-so-obvious part of his (Mr Fefer’s) character.

Soli are always thoughtful and ensemble playing rugged and enormously sympathetic too. As always Mr Fefer continues to ring in the changes in mood, structure and tempo (from “Testament” to “Magic Mountain”, for instance), making for a constantly interesting programme. The hypnotic rolling “Gnawa rhythm” on both “Magic Mountain” and (especially) on “Essouira” is eloquently suggested by Mr Revis’ sintir (or guembri) like bass lines and Mr Taylor’s quarqeb-like chatter on his cymbals. The considerable degree of balance and integration of melody, harmony and rhythm, of composition and improvisation, of exploration, individuality and tradition is impressively maintained throughout this album to absolutely die for…