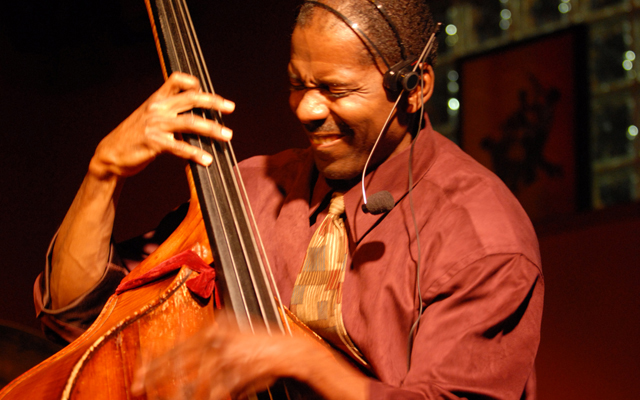 While no one was looking the bassist Avery Sharpe has created possibly the finest homage to Sister Rosetta Tharpe, the high priestess and pioneer of rock n’ roll, an American original, who bucked the trend by melting the sacred into the secular in the 1930s and 1940s and turning early rock into a domain all her own. Sharpe Meets Tharpe is a gleaming gem of an album. It is a great triumph for Avery Sharpe, who cut his teeth in the Church of God in Christ before going on to playing with McCoy Tyner on his epic album Double Trios. 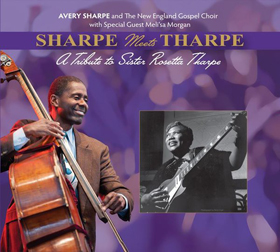 The vivid, pregnant lines of the lyrics meet the remarkably spun African American Spiritual and each word sung by a wonderfully-talented lead vocalist, Meli’sa Morgan, is felt and weighed in music. Possibly you don’t even have to know that Morgan is singing Rosetta Tharpe’s words any more, yet her vehemence and passion suggest she thinks justice is finally being done to a woman who never did get much of a chance to tell her side of the story. To my mind, Morgan’s special performance, which is full to the brim with insightful musicianship and has a refreshing avoidance of contrived formulas, comfortably joins great mezzos as the finest examples of this kind of perspective on performing Rosetta Tharpe’s sacred and secular masterpieces.

Alongside this, the bassist’s sound world is a mass of glinting detail. There are prominent parts for acoustic and electric bass (plucked and bowed) with growling gravitas that swerves between microtonal clusters, double stops and gloriously stellar echoes. There are ravishing blurs of downward lines and if it does sound like gloriously sacred showers of light through a bass brightly, then it is really so. Sharpe treads hypnotically into the spiritual realm evoked as if by clapping hands and hands thumping on the skin of a bass drum. His work is pure magic throughout from ‘Up Above My Head’ and ‘Lonesome Road’ to ‘This Train’.

The New England Gospel Choir under the direction of the wonderful tenor and bass voice of Kevin Sharpe is brilliant. You hear every word of the soaring anthems without need for a booklet and printed text. The soloists are bright and clear sopranos, both articulate and expressive, tenors who offer bold attack and vitality in tone, all of whom shape the lines sung by Rosetta Tharpe with imagination and grace. Tenor/bass Kevin Sharpe brings enriched tone to bear on the lowest solo line, singing with firmness, lyricism and a powerfully communicative quality.

This is a triumph not only for the Avery Sharpe, Meli’sa Morgan and the New England Gospel Choir but also for the rest of Sharpe’s band who impress with the distinctive colour and vibrancy; their playing which is so consistently alert. This is truly a miraculous performance on a monumental disc.

Track List: This Train; Shout Sister Shout; Miss Nubin; Up Above My Head; Down By The Riverside; Spiritual Dilemma; I Want A Tall Skinny Papa; A City Called Heaven; Lonesome Road; This Train (extended play).