It is one of those travesties of justice that the brilliant pianist Aruán Ortiz is not as widely known as his other contemporaries that have crossed over from Cuba to the United States. The fact of the matter is as performances both in the studio and live would show, Ortiz is not only every bit a virtuoso as, say Gonzalo Rubalcaba is, but also a pianist of unrivalled intellect and intuition. More than any other Cuban-born pianist, Ortiz can claim descent from the forefathers of Afro-Cuban music as well as Afro-American, which albeit a common genealogy requires a vastly different mindset. Moreover, Ortiz has composed music in a breathtaking array of forms from the song to a ballet and performed in settings from solo, trio and large ensemble. His recorded output is somewhat leaner than Rubalcaba, but it is every bit as significant. 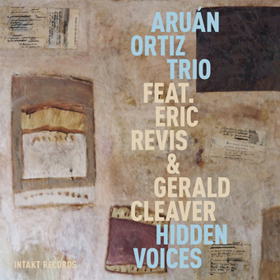 Aruán Ortiz’s 2016 album for Intakt peals away the curtain from the pianist’s proclivities and sensibilities to reveal a musician and thinker who qualifies to be recognised in vastly greater spheres than he is. At first blush Hidden Voices might strike the listener as somewhat abstruse even in the realm of the avant-garde. Ortiz employs not only vastly experimental technique towards the conventional piano, as evinced by the music of Joyful Noises, but he also pushes his colleagues – the bassist Eric Revis and drummer Gerald Cleaver, both experienced experimentalists – to reach much further into the rhythmic territory. Compositionally, Ortiz opens up jazz to a newer variant of the music that Cecil Taylor continues to bring to the table. Here Ortiz melds the world of science – specifically mathematics – into the world of jazz.

All of this might place the music of this album at some distance from the regular jazz listener’s ears. But upon closer scrutiny, it becomes clearer that Aruán Ortiz is doing what few musicians – especially in jazz – are bold enough to do. In this regard comparisons to Anthony Braxton and Taylor might not be so odious after all. Ortiz is actually pushing the boundaries of the music beyond the realm of American music to where it was always meant to go, atmospherically at any rate. His take on Ornette Coleman’s Open & Close/The Sphinx comes barely close to Coleman’s original. What this indicates is not only a pressing need to innovate, but also turn to make new an idiom of the age. The same can be said of Thelonious Monk’s Skippy.

But it is Aruán Ortiz’s own compositions that are most compelling here. Not only are they superbly put together but they also bring breathtaking new music to life. It is here that Ortiz shows how he is consciously crafting the outlines of a new idiom for music. To this end Ortiz is bringing an important element of his craft into the artistry of music. For all of these reasons Aruán Ortiz must surely qualify for something more than just the recognition of the cognoscenti. But that, unfortunately might take some more time. Till then, there is his signature music for unabashed enjoyment.

Forty-two-year-old Cuban-born, Brooklyn-based pianist, violist, and composer Aruán Ortiz has written music for jazz ensembles, orchestras, dance companies, chamber groups, and feature films. His work incorporates influences from contemporary classical music, Cuban-Haitian rhythms, and avant-garde improvisation; and consistently strives to break stylistic musical boundaries. He has been called “the latest Cuban wunderkind to arrive in the United States” by BET Jazz and “one of the most versatile and exciting pianists of his generation” by Downbeat Magazine. Read more…