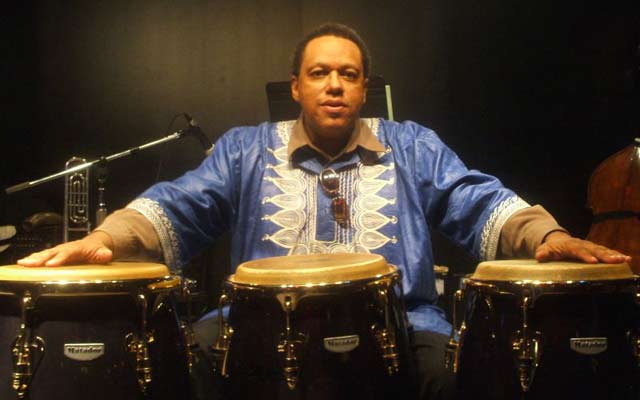 No party for the 50th Anniversary of the Chicago AACM could be complete without the glorious rumble of Art “Turk” Burton’s conga drums. His has been a continuous journey through education and art – and a most rewarding and artfully conceived one at that. Art “Turk” Burton shot to prominence during the earliest years of the avant-garde movement in music in the 60’s. The dark, decorous and beautiful coaxing of song from the pliant skin of his drums has resonated in the music of every member of the Chicago collective from Henry Threadgill to Wadada Leo Smith since the inception of the collective. Mr. Burton’s wonderful sense of registral balance and articulation has intensified the colours and the emotions of the music of the AACM throughout its five illustrious decades. To put down all of his masterly work in celebration of this auspicious occasion would need much more than just the one disc. Despite the constraints the present one Spirits: Then & Now does capture some of the wonderful highlights of what was and what is the life and time of Art “Turk” Burton. 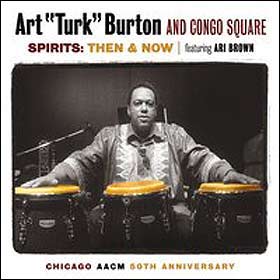 The first two songs are from a performance at Rick’s Café Americain in 1983. The disc leads off with an arresting tribute to the great Cuban pianist Chucho Valdés. I love Mr. Burton’s crisp articulation and lightly caressed outer movements of Cuba: A Tribute to Chucho. But there is a deeper story; a more telling sub-script if you will. It is a reiteration of the common root of all Afro-American and Afro-Cuban music. There is an arresting, impetuous musical rendering of this historical fact that opens and continues through this wonderful piece. Mr. Burton has little inclination to bathe the passagework in an impressionistic haze, as many players may choose to do, choosing instead to emphasise the virtuosity of the writing and reminding us of how much is owed by both branches of the music to the devastating beauty of polyrhythmic Africa. Sonny Gets Blue is the next blast from the past and a proverbial doffing of the hat to John Coltrane – one of several on the album. This performance along with the previous one unleashes the music’s ecstasy and angst.

The next six charts are from Art “Turk” Burton’s current repertoire. They are studio recordings, but the energy that is palpable throughout this set might suggest the triumph of the concert stage. Three of the pieces – Mojuba, Mr. Brown (Cold Sweat) and Soul Naturals – are original compositions by Art “Turk” Burton. The pieces become entirely different animals in Mr. Burton’s darkly coloured orchestration and are the highlights of the current incarnation of his group Congo Square. The music sounds like a cross between the heartbeat of the motherlode of all rhythm and the visceral streetwise sound of Chicago as transported to the layered textures of this outstanding band. The atmospheres lean towards the brooding and the dramatic – even in the arrangements of Mongo Santamaria’s Afro Blue and the two John Coltrane charts, Moment’s Notice and A Love Supreme.

Art “Turk” Burton takes every opportunity – both with his own compositions as well as with the rest of the repertoire – to add sonic interest by passing figures among the solo instrumental sections. These wise musicians such as Harrison Bankhead, Ari Brown and the other musicians give the entire score a performance that balances tonal depth with expressive intensity. Much is being made of the 50th Anniversary of the Chicago AACM but it pays to pause and ponder the significance of musicians who inhabited the rhythmic periphery of the group and who made deep and indelible contributions to one of the music’s great movements.

Art T. Burton has a distinguished career in education and the arts. He received Bachelor and Master’s degrees in cultural and ethnic studies at Governors State University (GSU), where he served as student assistant dean. Additionally, he was selected as a recipient of “Who’s Who Among Students in American Colleges and Universities,” and traveled to Brazil with GSU’s award-winning Jazz Band as their percussionist. Read more…