This double disc presents music that is not as cerebral, and eschews the intellect for intuition. It is framed within the borderless elasticity of the jazz idiom and unlike The Meridian Suite which is largely through composed. However, the music is not misshapen as much improvised music might be at the hands of lesser musicians. It’s “mathemagic” is framed by three superb trios. The first trio comprises Antonio Sanchez, with Brad Meldau and Matt Brewer. In the second trio, Mr. Sanchez included John Scofield and Christian McBride and the third trio is with Joe Lovano and John Patitucci. The composition of each trio is unique and has the drummer playing off a piano, a guitar and a saxophone. At the risk of giving the game away, let it be said that the entire cycle of nine tunes speaks taking hold of the music like the claw of a lion, which indeed is quite the manner in which Antonio Sanchez appears to have designed the music to feature his conversations with each of the featured doppelgängers: the piano of Brad Meldau, the guitar of John Scofield and the saxophone played by Joe Lovano. 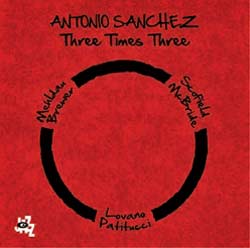 While the music is not written and performed to be suite-like, as in the case of The Meridian Suite there is a certain interconnectedness throughout the music on these two discs. The musical pronouncements are similar in tone and manner to that of concerti, where you can find the soloist in constant conversation with the other members of the ensemble. Although these are trios and not symphony orchestras, the intensity of the musical conversations is much the same (as those involving Bill Evans and…, Jimi Hendrix and…, and Charlie Parker and…). These unfold like movements in transition in which deeper truths lie and that are not only because of the extent of the musical ‘digging’ but also because of Antonio Sanchez’s alter egos: i.e. pianist Brad Meldau, guitarist John Scofield and saxophonist Joe Lovano. The quality of timing and attack is as different as the instruments are, as well as in the scrupulous observation of dynamics and the lead character’s (that of the drummer’s) practiced way of playing with seemingly imperceptible changes of rhythmic motion which leads us to the works’ (of each trio, that is) haunted dream stated.

Four time Grammy Award winner Antonio Sanchez is considered by many critics and musicians alike as one of the most prominent drummers, bandleaders and composers of his generation. Born in Mexico City on November 1st, 1971, he started playing drums at the age of 5 and began performing professionally early in his teens. Read more…