This is music that shall be known for the relative astringency of its sound. These performances by woodwinds, piano and keyboards, guitars, basses and voice have a certain degree of immediacy in a clean but lively acoustic. It is music that provokes rather than soothes. It is informed by the personal traits and character of its composer. But it is written in a manner that is perceptive, to be understood by and expressed with the expertise of Seamus Blake, John Escreet, Matt Brewer, Adam Rogers and Thana Alexa. The composition is personal in nature but it moves easily between aspects of its composer’s character and the poetry of triumph of human endeavour. The five movements are clean of line—melody—rich in its aural molecules—its harmony and tantalisingly beautiful in it’s constantly shifting tempi. Antonio Sanchez has conceived of this music in a manner that depicts the movement of melodic lines as they criss-cross the body of the music’s architecture, which is rooted as much in the electro-magnetic fields of the earth as it is in those of the mind. 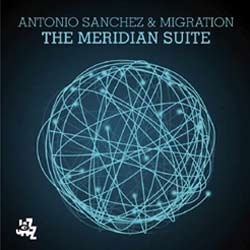 The music’s edifice is constantly moving ever forward and whether buffeted by blustery or seemingly still currents it presents a poetry of orbital line with absolute delight as well as maddening complexity. Although the music is one of abstractions rendered in melodic line, its metaphor is anchored in the concreteness of Antonio Sanchez’s drums. The drummer’s account of the variations in each movement resembles music of tautness of argument melded into a finely adjusted sense of tempo relations within and between each of the movements. There is no harrying of the music, but rather a bending it towards the composer’s will. Even in the acutely personal “Pathways Of The Mind” Mr. Sanchez’s approach is nearly aligned with the polyrhythms of The jazz idiom where swift tempi, buoyant phrasing and forward winds are married to strongly drawn lines which move the music unerringly towards its appointed goal.