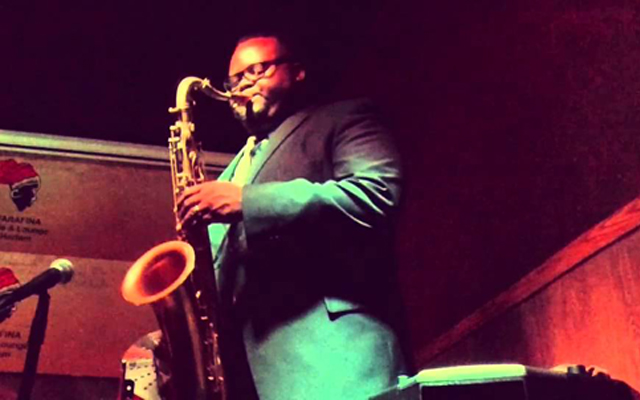 The music of Anthony E. Nelson Jr. on Swift to Hear, Slow to Speak is quite memorable in the manner in which it describes the troubled and eventually elevating relationship between man and his Creator in the rawest, most visceral terms. In this respect it is not that different from the Praise and Worship of the earliest times, from the Moses and the prophets (in Songs of Praise from the days of Elijah and Elisha down to Isaiah and Jeremiah), The Psalms of King David and The Song of Solomon. Nor does it deviate much from scripture spoken through the prophets to the apostles, by God in Heaven and Christ on Earth; scripture spoken through the Holy Ghost. But using scripture in all its lyricism, Nelson Jr. vaults into a rarefied realm in a lyrical idiom he calls Gospel Jazz.

Each of the twelve songs is a Pentecostal testimony and Anthony E. Nelson Jr. is indeed a lightning rod for The Holy Ghost who is indeed known to inspire such testimony as through music ministry – in this case –the ministry of the saxophonist’s. Anthony E. Nelson Jr. is a modern day zealot. His music is truly evangelical, and his sermons are from the pulpit of Jazz. His sermons are born of the Old Testament in the spirit of Isaiah’s great revelation for everything comes to “Those Who Wait”. He also revisits the Psalm 150 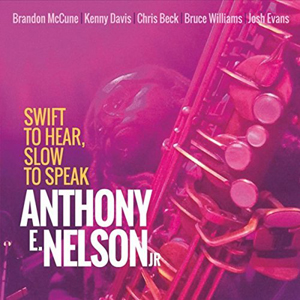 of King David as if closing the cover of this Psalter. However, this is not before also waking up to the Wisdom of Solomon in “Softly She Said (A Tale of Two Women) [Proverbs 7:6-27]” and later in “More Than Rubies (Proverbs 31:10-31)”.

But his most majestic sermons come from waking up in The New Testament: from Matthew, Mark and John; James and St. Paul, reaching its pinnacle in the Sermon on the Mount – The Second of Eight Beatitudes of Jesus Christ Our Lord – “Blessed Are Those That Mourn”. It is not hard to “feel” this music, certainly not as its idiom (Jazz) was often at the heart of the struggle for the Soul of The Man, by whom we mean the Jazz Musician, once condemned as one who fell prey to “The Devil’s” Music. But “they” said that about Paganini too, though Anthony E. Nelson Jr. will give no one reason to say the same thing about himself, or about Swift to Hear, Slow to Speak for that matter. In fact, the whole project is a masterpiece of subtlety from end to end.

His saxophone sings and nowhere more ebulliently than on “More Than Rubies” where Anthony E. Nelson Jr. together with the rest of the ensemble, from Brandon McCune on piano to the ineffably brilliant Josh Evans on trumpet, becomes a chorus of heraldic heavenly host. As ever, Nelson Jr.’s take on the lineage of his cool spacey music is less than conventional here, seeing him summoning breathtaking woodwind tones from the instrument(s) which float gloriously over the rest of the ensemble that in its turn adds a rich and not entirely predictable harmonic foundation to the music, The surprises when they come, are effective but discreet: a gamelan-like riff is played as pizzicato harmonics.

Finally, the delicate curlicue of a bass line underpins what often sounds like a shout of joy, and a close-knit ensemble passage develops from a single phrase. And this is what closes a performance that has been recorded with a fine balance between detail and warmth.