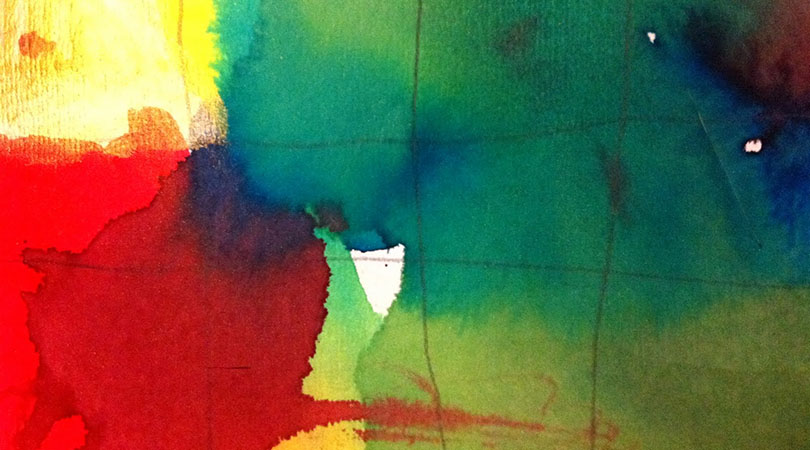 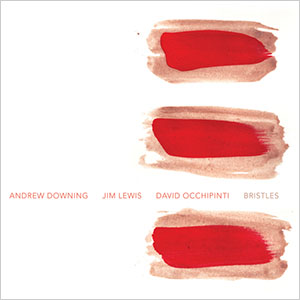 Painters and musicians may make strange bedfellows. After all the former are children of Apollo—born of reason, order and clarity—and the latter are children of Dionysus—born of impulsiveness and intoxication, which makes the relationship a metaphysical act of will. As in life so also in the arts. This classic collision is what informs the exquisite album, Bristles by bassist Andrew Downing, trumpeter Jim Lewis and guitarist David Occhipinti. The music like every painting ever painted by the painters’ flows in tonal arcs created by entourages of notes dappling the air in the room in which they are heard. Such an experience is hard to forget especially in the intensity of which the music is played. The exciting con arco playing of Mr. Downing and the wry voice of Mr. Lewis, and the glue that binds it all, in the high and lonesome twang of David Occhipinti’s guitar would be hard to emulate, except if it is the same three musicians exchanging roles of lead and harmonic voices and the three musicians have plenty of opportunities here. The slow burn of the music and the spare nature of it all by each one of the musicians becomes grist for each others’ grinding.

There are no obvious leaders in this trio music. Each of the musicians has the opportunity to turn in a performance that might be categorized and leading the charge. Andrew Downing is one of them who leaps in given the slightest opportunity, or when it is written in the score. His playing is easily described as virtuoso in the broadest and in the most specific sense of the word. Mr. Downing has sublime technique and this is heard in every note he plays. His choice of these is never determined by the harmonic element, but often in the emotion of the moment. Thus he very rarely plays the root note of a chord in his solo outings, but dances around these with an avid sense of swing as well as often in profoundly beautiful thoughts that emerge from his bowing and pizzicato playing. The beauty of “My One And Only Love” and “Once I Loved” as well as the sense of clawing realism and wild rambling on “Wassily Kandinsky” and “Paul Klee” will never fail to amaze the avid listener. Perhaps this is only because Mr. Downing has the trumpeter Jim Lewis to coax him to move on and on.

Mr. Lewis’s playing is informed by the great tradition of Thad Jones and Clarence Shaw and Miles Davis. Never are too many notes played. There is a lot of breathing and much space in between the notes in any given line. And when the music must be informed by a gusty arpeggio or a dazzling upward or downward run the trumpeter is there to do the bidding of his Muse. There are plenty of examples of this magnificent playing in “You And The Night And The Music.” But there are broad and exciting glissandos on other charts too. David Occhipinti’s playing is in much the same vein as Mr. Lewis’. It is spare like the painter-poet “Paul Klee” and it can also be yammering and chatty in “Emily”. Mr. Occhipinti is sublimely graceful in what he plays. His taste and intellect betray concrete thoughts and motifs laced with brilliants melismas. This is a thing of rare beauty as there is often little time and opportunity to make a statement and hence a presence felt. But the guitarist seems to respond to the music with great eloquence and memorable styling. Together these musicians command each other’s respect and turn trio music on its head. They occupy a rarefied realm and redefine the overall sound of the trio just as Paul Bley Steve Swallow and Jimmy Giuffre did in their iconic trio of recordings of the 60’s and the return of that trio if 1989. Bristles is quite simply a memorable record.

Track List: Cy Twombly; Solar; Emily Carr; My One And Only Love; Jackson Pollock; Once I Loved; Wassily Kandinsky; You And The Night And The Music; Paul Klee; Emily; Jean Dubuffet; I Fall In Love Too Easily.

Andrew Downing is a Toronto based double bass player, cellist, composer and educator born in London, Ontario in 1973. He plays primarily in the creative jazz scene in Canada, but also performs classical chamber music, improvised music, folk and roots music, and world music. He practices the unusual craft of tuning his bass in fifths an octave lower than a cello. His teachers include Jack Winn, Dave Young, Don Thompson, Shauna Rolston and Joel Quarrington. Read more…

Guitarist/composer David Occhipinti has twice been nominated for a Juno award, once for his CD, Forty Revolutions (2007), and also for, Duologue (2003), his first of two duo CDs with saxophonist Mike Murley. On his recent release, Camera (2012), David combines elements of contemporary chamber music with improvisation. The recording features David’s compositions and guitar playing, with a unique ensemble, consisting of: clarinet, bassoon, marimba, violin, viola, cello, and bass. The recording also includes a suite for guitar and string quartet. Read more…

Jim Lewis is a freelance trumpet player, composer/arranger in the Toronto area. He is a member of the Paul Read Orchestra, and the Musical Director and featured soloist with the Jazz Mechanics Big Band, with whom he toured Italy and Austria in 2006. He can be heard in clubs in the Toronto area, Ottawa and Montreal as a sideman and with his own projects from duo to sextet. Jim has been featured on CBC’s Jazzbeat and has played Jazz Festivals across Canada, in the United States and Europe with some of Canada’s most creative jazz musicians. Read more…