I can only speculate what this musical equivalent of the Triple Helix must be. If my guess is right it has to do with the strands of protein collagen – the dancing particles of Jazz, Mediterranean Latin music – spinning around the single axis that is Anat Cohen. Even if it were not so, I like to think it is and this vibrant music that rises and falls as nine other instruments propel their melodies, harmonies and rhythms ceaselessly around the fulsome and gloriously woody tone of Miss Cohen’s clarinet certainly makes this so. 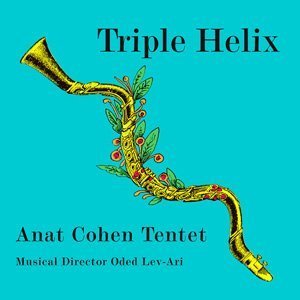 This is the second “tentet” recording from Anat Cohen. It follows Happy Song which was released in 2017. The music – much of which is composed, orchestrated and conducted by Oded Lev-Ari – builds on the vivid colours and lush textures that we were first introduced to in Happy Song. But the music is Triple Helix has so much more and this rises to eminence on its centrepiece – the three movement “Triple Helix”. It is a brilliantly concentrated piece in which the central theme of longing is magically transformed and resolved through the deft employment of colour. Brass and wind seem to dominate the moving character of the theme, while shimmering strings and roaring percussion are mainly used to establish the requisite tautness that keeps the momentum going.

As in that work, so also in the rest of the repertoire, the fulcrum of the music is the clarinet of Miss Cohen. In her hands and at her lips the instrument of human emotions that range from the composed and serene to radiantly vivacious. Miss Cohen is certainly one of the great virtuosos of her instrument and she can seemingly make it do anything because it has, quite simply, become an extension of herself. All she has to do is get into character. Everything then flows from there. In the build-up of the slow movements of “Triple Helix” – as on the layered instrumentation on such pieces as “Milonga Del Angel” and “La Llorona”, for instance – she shines with diaphanous textures, rhapsodic climaxes and striking atmospheric effects , which are both magical and seductive. Everything else flows from there through impeccable ensemble playing and striking soli from the brilliant musicians of the tentet.

Mr Lev-Ari’s music is as much the raison d’être for this tentet as is Miss Cohen the pivot around which the other musicians strut their stuff and around which Mr Lev-Ari’s music pirouettes. His (Mr Lev-Ari’s) music reveals a debt to his Romantic ideals in its rich chromaticism. The music of “Triple Helix” stands at the pinnacle in its tight structure and especially in the greater rhythmic incisiveness combined with the skillful atmospheric writing especially in the slow movement. On this disc he elicits beautiful and dynamically varied sounds from the Anat Cohen Tentet, and employs a keen sense of dramatic pacing so that the sections (on the concerto) grow out of each other naturally. For the record there are also many other moments of real incandescence throughout the recording.