Home Music Anat Cohen | Fred Hersch: Live in Healdsburg
It’s not as if a duet between piano and clarinet has not been done before. In 2011 there was an iconic album, by Eddie Daniels, Roger Kellaway, Live at The Library of Congress which set the bar somewhere in the stratosphere. But now until Anat Cohen and Fred Hersch have moved that very bar impossibly higher with their own Live in Healdsburg. Each artist, worshiping at the altar of originality, has taken it upon themselves to issue this music as so much more a thoughtful and imaginatively conceived recital. It is, indeed a full-blown love letter – from Anat Cohen to
Fred Hersch and his piano and, in response, from Fred Hersch to Anat Cohen and her clarinet.

So here is a disc which enshrines the soul of each contributing artist’s playing, with a not a little help from some gorgeous melodies – such as perhaps the main story in “Child’s Song”, followed by hardly-an-afterthought in the eternally beautiful Jimmy Rowles classic, “The Peacocks” – both with sweeping, lyrically-tossed grandeur and glittering bravura on the part of both Anat Cohen and Fred Hersch. However, the genius of clarinetist and pianist does not only shine on those charts. 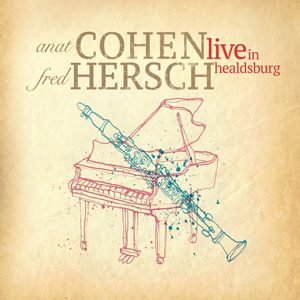 Listeners may take their pick of any one of the other six songs all the way down to the monumentally bluesy “Mood Indigo”, which the duo plays with bittersweet majesty.

In fact the playing throughout is eminently suited to the music as well. Mr. Hersch has an superior tone – fierce and tight at the top, full-blooded and sultry at the bottom – and he takes real delight in the rapid-fire shifts of musical character as Miss Cohen comes into her own – not so much following him as opening hidden doors and portals so seductively that the pianist is wont to follow in, completely bewitched. Miss Cohen’s playing is utterly sublime, strong in alt, with quicksilver precision and a fabulous trill to close her phrases in that mode as well as when she plunges into the depths, rumbling in the lowest register. Her dusky tone and pastel colours are eminently suited to the music on this album which absolutely to die for.