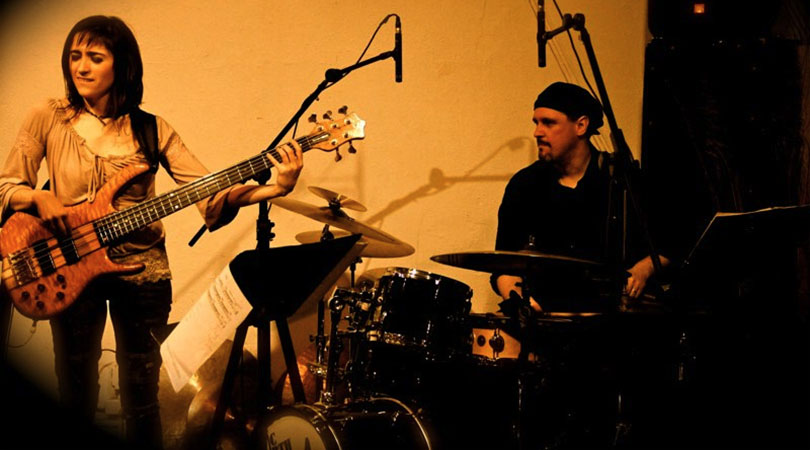 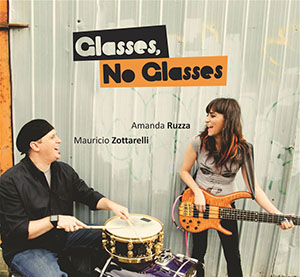 The music on this recording Glasses, No Glasses is—certainly not—some updated Weather Update, or even the P-Funk All Stars on speed and even though the mystery of its title is not revealed until the end of the recording it is music that is, like the legendary music of Hamelin, something so alluring and magnetic in a primordial sort of artistic manner that it is possible to find a listener or two in a state of suspended animation while the beguiling and raw bass of Amanda Ruzza, the mind-bending keyboards of Leo Genovese and the visceral energy of Mauricio Zottarelli’s drums and percussion mesmerises those listeners who dare to venture where this ensemble would like to take them. And in the nicest possible way it is frighteningly exciting to make the expedition with an ensemble that reports from one end of the world’s musical spectrum: the ever-changing landscape of music and indeed all performance art that is melted and poured into the Holy Grail of modern artistic motifs and melismas.

These musicians are chomping at the bit, evidently working up a storm that comes from the very high-wire act that they have brought to the recording studio—apparently largely without as much as a written script. But it is not so hard to imagine their walking the proverbial wire without a safety net. The examination of Mauricio Zottarelli’s percussive skills go way beyond the confines of a straight-ahead samba and together with that other Brasilian wunderkind, Amanda Ruzza, they seem to have dragged Brasilian music by the hair and out of even Carioca rock and funk and Paulista pastiche. But this is what it was like when MPB was born and when groups such as Gilberto Gil and Caetano Veloso, mesmerised by the rock of the Beatles and the Rolling Stones broke free from Bossa Nova and when Os Mutantes and Rita Lee predated the head banger’s ball. Now add to all of this something of a madman across the water in the form of the angular pianism of Leo Genovese and something of what this group represents might just become palpable.

To call this music raucous would be a misnomer, something of an understatement, because it is much more than that. That it is music which shatters misconceptions of what Brasilian musicians ought to be playing is more like it. Many would feel that this is blasphemous and anathema. But not Mr. Zottarelli, Ms. Ruzza and Mr. Genovese, who actually get down and dirty making this music swing, shuffle and sometimes march on like the old Second Live of New Orleans in for instance “Big Foot,” a Mauricio Zottarelli composition no less. And for those who might miss the dusty backbeat of the samba, there is that as well on Ms. Ruzza’s longer expedition, “Sugar High.” So what on earth is Glasses, No Glasses? It is a stripping away of the façade of comfort zones; it is viewing the world without the proverbial tints; it is a celebration of the beautiful madness of music, whether it comes from Brasil, or America, or Mali, or for that matter, the real Timbuktu.

And from the perspective of Mauricio Zottarelli, whose drums thunder and roar; whose cymbals pirouette in the smash and shattering of percussion colouration and from the growling of Amanda Ruzza’s bass and the mad rush to the head of Leo Genovese’s acrobatic playing, this is a first rate set from a crew that is deceptively loose… This is a group of musicians who is taking much of its music to the next level. For this is where the energy and all the talk of seeing the musical world as it is… That is where the musicians are really at.

Amanda Ruzza is an electric bass player and composer based in New York City. Born in São Paulo, Brazil to a Chilean mother who loved opera and an Italian father who loved rock n’ roll, Amanda developed an eclectic musical ear at an early age. Fluent in Portuguese, Spanish, Italian, and English, music was one more language that she learned to used to communicate across international cultural boundaries. While growing up, there were always records playing at her house, and Amanda started playing bass at the age of 12. By age 13, she was already gigging professionally. Read more…

Brazilian born, New York City-based drummer/composer Mauricio Zottarelli has been on the forefront of the Jazz, Latin and Brazilian music scenes for many years. Called a “superb drummer” by JazzTimes magazine, Zottarelli comes from a musical family and was born in Santos, SP, Brazil, but grew up in Rio Claro, SP in a highly musical environment. His first few years as a professional musician consisted of many performances throughout his native country as well as studio and bio session work with different artists and bands. At the same time, he pursued a degree in Computer Science, and concluded his studies in 1997. Read more…