Home Made in Canada Allison Au Quartet: The Sky Was Pale Blue, Then Grey 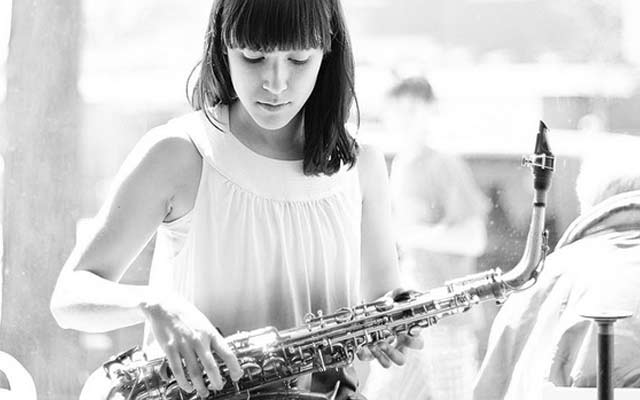 It’s heartening to know that we live in a time when a new generation of Canadian musicians appears to be blossoming. Not just any musicians, mind you; a very good group of musicians of which the alto saxophonist Allison Au is a member. Listening to her live is a very rewarding experience. She is calm, plays with warm tone, always abounding in a gorgeous, moist colours all of which is done without indulging in any artificiality. And she seems to have conduct her quartet with telepathic authority – just a look here and a look there and the music is guided from a highway into a by lane, which means a change of pace and often timing and pulse as well. And best of all, her soli are endlessly inventive, varied in contexts of space and time. Clearly she is a reluctant showman, but also appears to enjoy surprising and amazing her audiences. 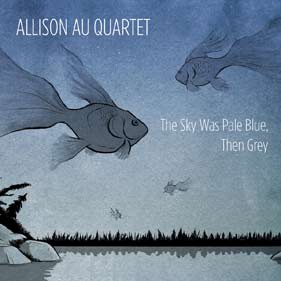 On a 2012 recording – The Sky Was Pale Blue, Then Grey you hear all of this and more and even though you do not have the benefit of being in the club with her, you always end up being up front and centre as if she is playing just for you. The recording made by David Hermiston has much to do with that, but it has all to do with Allison Au really. The alto saxophonist is quite the artist. She can take a line for a walk though she always underlines the profound differences between painting and music. Moreover, she is a fine writer as well. All of the music has either been written by her, or has her hand in it. Here she actually takes a myriad of lines for runs, rather than for walks always seeking to maintain perceptible continuity within structures that resonate with traditional musical associations.

Ms. Au’s compositions have a singular authority as well. Her music is idiomatically related to her horn, but also ‘dangerous’ in a sensuous, feminine sort of way and surprisingly quirky. And they have a depth of meaning that you don’t normally associate with a musician of her age. Perhaps she is an old soul after all, which is probably she often reminds me of Joe Henderson whose music is awash with gorgeous warmth and a dazzling palette of colours that seem to melt the notes as they follow each other on lines of extraordinary memorability.

I have said earlier that Allison Au is quite painterly in her playing and this is borne out by three exquisitely impressionist pieces: “The Bridge At Night”, “What Went With The Wind” and of course “The Sky Was Pale Blue, Then Grey”. However it’s not wat you think. There is none of that dated feeling about what you hear so I would not think Debussy, Ravel and Fauré, but rather Klee and the painter poets of that generation. I suppose what I am suggesting is that her music is more modern, brighter and endlessly optimistic. She has absolutely no dark side, despite what the graphics on the cover of this disc might suggest. On the contrary she revels in the elegance and playfulness of her music. Her quartet ( + 1) evidently finds the music rewarding as well for they give t heir all throughout the repertoire.

Track List: Birdy; The Bridge At Night; La-Da-Dee; What Went With The Wind; Tired Face; The Orchid; The Sky Was Pale Blue, Then Grey

Juno-nominated Allison Au is a Toronto-based saxophonist, composer and arranger. Since its formation in 2009, The Allison Au Quartet has maintained a steady performance schedule at Toronto’s major Jazz clubs. The group was the recipient of the TD Jazz Fellowship Scholarship in 2011 and the Alfred and Phyllis Balm Scholarship in 2012 to attend the Winter Creative Music Residency at the acclaimed Banff Centre. Read more…