Home Music Alexander von Schlippenbach Globe Unity Orchestra: Globe Unity 50 Years
Every time of the seminal work Globe Unity is performed, it becomes much more than a re-imagined version of the one that Alexander von Schlippenbach conceived of and performed in 1966. It is a reincarnation of music that lives and breathes and grows out of the very breath the brass and woodwinds players and drummers, and of course Mr. Von Schlippenbach, by whose hands it was born. This 2016 performance to mark the golden jubilee of the orchestra which first performed it is no exception. The ensemble, whose numbers have swelled since Joachim-Ernst Berendt first instigated musical “agent provocateur”, Mr. Von Schlippenbach to gather together some of the leading lights of free improvisation and debut the work at the 1966 Berliner Jazztage, does include some of the earliest members of the band, but the others are new and therein lies the wonder of this latest incarnation. 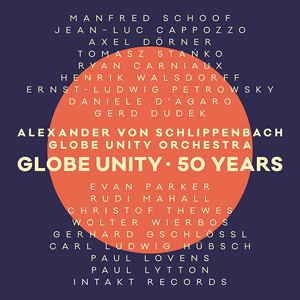 Like its title suggests “Globe Unity” is a viscerally exciting allegory of human interaction expressed in music by brass, reeds and woodwinds, drummers and Alexander von Schlippenbach, who takes on the onerous task of conducting these voices of “earth”, represented, if you like, by the drummers, and “wind”, represented by the very breath of Babel-like voices of the various trumpets, saxophones, flutes and clarinets raised in a gigantic wave of polyglotism rising and falling as they come together and fall apart. This exuberant, forty-four minute orchestral showpiece “Globe Unity 50 Years” is like a heaving geological metaphor, Here orchestral strata are engages in shifting relationships evoking the proverbial massive natural forces that shape the planet. Sometimes the strata stack up immensely; at other moments they thin to diaphanous textures, but always there is a sense of returning to the same point, only to discover that the interim view has changed.

This suits the purpose of the work’s creator and its participating co-creators – the musicians of the Globe Unity Orchestra. Moreover, on top of all of the seismic musical processes, Mr. Von Schlippenbach fosters a virtuoso orchestral superstructure whose riotous details suggest the teeming life of the Earth in all its protean variety. Musicians, old and new members of this aristocratic orchestra – from Gerd Dudek and Ernst-Ludwig Petrowsky, to Evan Parker, Manfred Schoof and Carl Ludwig Hübsch, and Paul Lovens and Paul Lytton – tussle mightily with the Germanic grit of Alexander von Schlippenbach’s grandest structures. With fine accounts in solo and various combinations of ensemble passages, the trumpets, trombones, saxophones, flutes, clarinets, tuba, piano and drums offer once again – in this latest, most vivid incarnation – an excellent cross-section of Mr. Von Schlippenbach’s illustrious career-defining work.