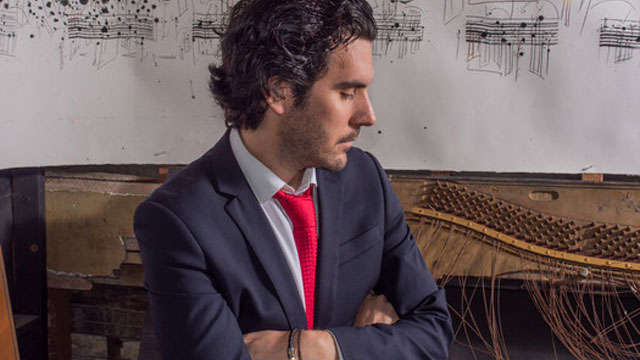 The album Descarga for Monk is a rapturous flamenco record. Yes, it is Thelonious Monk. But it is also Alex Conde. The quintessential Alex Conde… an incandescent musical world into which we are privileged to peek. The jagged brilliance, that same outrageousness that defined Charlie Parker, may not be in evidence but the angularity is still there, fueled by a natural lyricism and an indelible swing. This is characteristic of an ecstatic tribute yet one devoid of all obsequiousness. Despite the fact that Alex Conde is in the process of finding his own voice, cutting the edges of the diamond of his style his Thelonious Monk is rock solid. Its rhapsodic elegance is informed by all of the mystery and majesty of Monkish-ness. The elemental irreverence of Monk-music has been mastered by the young Spaniard. He worships at the altar of originality, as Thelonious Monk did pouring his twisting duende into molten chords. His phrases make for lines that erupt with volcanic brilliance and a viscosity that is unlike anything that has been sung of Thelonious Monk in a very long time. 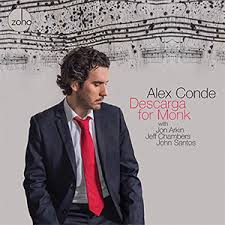 Alex Conde has taken a leaf out of the great pianist Chano Dominguez’s playbook, but his “Monk” is not as subtle as the ingenious ideation of Mr. Dominguez’s. In the world of the Andalusian, Mr. Monk’s wry tunes are sharply contrasted with the balletic quickening of the toreador, by the intricate drama of the Bulería of Jerez—both stunning patterns of rhythm—and the ballads are as ethereal as a Saeta and agonizingly dallying as the palos in which the Coplas of a Soleá hold sway. No, Mr. Conde’s “Monk” is different. Its voicings contain layer upon layer of colour from a seemingly endless aural palette. The musical textures and timbres are luminous, almost as if the matt finish of Mr. Monk gas turned gloss in the hands of Mr. Conde. Music such as this is so utterly memorable that it can only be compared to those singular sides of Chick Corea’s tribute to Thelonious Monk from the iconic Trio Music sessions (ECM, 1981) which featured eight seminal versions of Thelonious Monk’s charts. Alex Conde’s tribute might have been deemed to have been a bit lean on time were it not for the ingenuity of the arrangements.

“Played Twice,” “Think of One” and “Ugly Beauty” are breathtaking performances. The arrangements of “Thelonious,” “Monk’s Dream,” and “Evidence” are a vital exemplar of the rigorous palimpsest of Mr. Monk’s ideology. And “Round Midnight” and “Ruby My Dear” pyrotechnical performances that defy gravity. “Pannonica” is profoundly beautiful. It would be remiss to not mention the ingenuity of the accompanists: bassist Jeff Chambers, drummer John Arkin, percussionist John Santos and the magically mysteriousness of Amparo Conde and Carmen Carrasco. So complete is this ensemble that the de rigeur saxophonist to complete the dogma of Thelonious Monk-Charlie Rouse duet is hardly missed. This programme ends much too early and its exquisiteness vanishes in the exquisite mistiness of musical memory. But that is all great albums are made of: a sense of the temporariness of beauty that invariably vanishes in the relative infinity of timelessness.

Alex Conde was born into a family of artists indigenous to Spain. His father, Alejandro Conde, is a superstar singer in the style of “Canción Española.” The younger Conde graduated in Classical music from the José Iturbi Conservatory of Music in Valencia, Spain and in Piano Jazz from el Liceu de Barcelona. He moved to Boston in 2007 to attend the prestigious Berklee College of Music on a scholarship. While there, he studied with Danilo Pérez, Wayne Shorter, Maria Schneider, Joe Lovano, George Garzone, David Santor and Esperanza Spalding among others. Read more…