Like The Last Poets and Gil Scot-Heron; Amiri and Amina Baraka, Jayne Cortez, Oscar Brown Jr. and others before them, the art of the Afro Yaqui Music Collective explodes from the nuclear corona of the very sun – an artistic atomic reaction to the disintegration humanity, the disregard for civil rights in the USA and around the world and rampant degradation of the environment of planet earth. This repertoire sounds as it is meant to: the dark elegant death knell of western neoliberal capitalistic society as we know it; the crumbling of western capitalism…It’s all on the music of Maroon Futures.

This music has been inspired – to a large extent – by the wrongful incarceration of Russell “Maroon” Shoatz, a Black activist whose predicament was shared not only by Afeni Shakur, Angela Davis, the Soledad Brothers, numerous other members of the Black Panther Party, the roots of which run deep in the art of Charlotte Hill O’Neal as she ploughs her lonely furrow in Tanzania today. The revolutionary thinking that has – predictably – struck fear in the hearts of the US elite 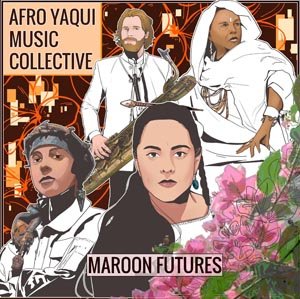 also fuels the powerful music of the Yaqui-descendent artistic warrior, Gizelxanath Rodriguez, who, being Mexican-American is seized of the deep emotional and political issues that have been cleaved into the issue of immigration in the USA.

At the heart of the strident, yet questing music of the Collective is Ubuntu, a word, that Africans use to describe “Brotherhood”; a word with powerful implications and great responsibility. The Afro Yaqui Music Collective sing [and play] this music where the dream of this brotherhood is ardently addressed not only in the viscerally energetic free-styling rap, but also in the razor-edged sound – with its undertow of harmonics and vibrant pulse and tempi sculpted into fine melodic lines. You will hear it in “Nonantzin”, the opening anthem sung in the Uto-Aztec language of the Nahuatl, where the vocals are underscored by the raw bellow of Ben Barson’s baritone saxophone as the Collective follows suit in a cry of despair and hope sung to the Earth Mother.

“Sister Soul” links the feminine spirit of the earth to the glorification of Matriarchy. It’s feminist message was crafted [and is also recited in a flawless, rhythmic manner] by Charlotte Hill O’Neal, but is shared by all the musicians of the Collective, the ensemble playing punctuated by a wailing solo from Yang Jin, cascades of harmonics from Roger Romero, Alec Zander Redd and Mr Barson too. The theme of incarceration is revisited in the profoundly meditative and idiomatic beauty of “La Cigarra”, which described the emergence to freedom of the cicada which emerges after the creature emerges after being “long-buried” to “sing a glorious song after fourteen years underground”.

“Ya Habibi” makes reference to repertoire of the legendary Egyptian chanteuse Umm Kalthoum. The romance of the Diva’s music is recast in a feminist metaphor, but retains the theme of a questing freedom, something that was always veiled and suggestive in her music. Nejma Nefertiti’s vocals are absolutely glorious here. The album ends with a composition by the illustrious Fred Ho, which is laced with musical influences from Ellington and Mingus to the political messages in narratives by Joe Hill and the poetry of Woody Guthrie. “Insurrealista” is a cry for revolutionary change fueled by the kind of radical humanity that informs the singular art of the Afro Yaqui Music Collective.