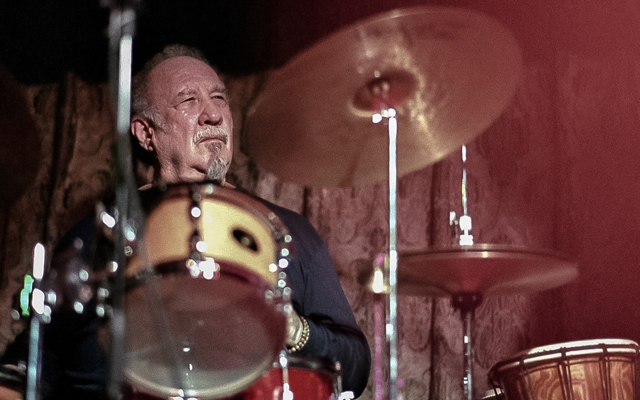 Listening to Mr Rader recount his experiences I am transported, once again, to The Flower Garland Sutra: It describes a profound interlinking of all beings in a web of relationships. Each being, itself the most honoured, is at the centre of its own existence; each is also intimately dependent on all others. Every action – whether to promote welfare or harm – is interlinked; sends waves of casual reaction to the edges of creation. With no boundaries between every being, nothing separates each one of us from others, nor from the karmic consequences of our actions.

As our conversation continues I begin to visualise this web as a node of light interlinking Mr Rader’s music, his Buddhism and his martial arts. In the 1980s, he worked with alto saxophonist, and intrepid musical adventurer, John Handy, the violinist, L. Subramaniam as well as bassist, Sigi Busch. “John encouraged me to allow the power to flow out onto the drums. He gave me the opportunity to solo behind his saxophone and I learned much from him, playing here in the US and especially later when we toured Europe. I finally settled back in the US and it was great to connect with all of the amazing musicians like (violinist) Billy Bang and (saxophonist) Dave (Liebman), Frank (Lowe). And Billy Higgins…” at which point he grows quiet for some time…

“But it’s great also to be playing with Peter (Kuhn) Kyle (Motl) and with Drew (Ceccato),” he says. I mention another soul-brother, John McMinn. In answer Mr Rader says, “John is special, man. We have a bond not just with music, but life as well.” My mind goes back to the Flower Garland Sutra again. In this universe of luminosity – the one which includes Mr Rader – these seem to be no divisions of past, present and future. All of them seem to be contracted into a single moment of present where life quivers precariously, but in its true sense. This is what makes listening to the music of Mr. Rader a singular experience. 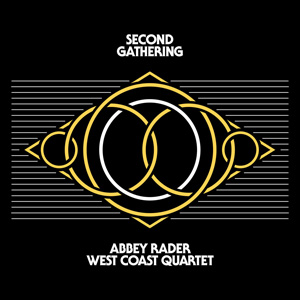 Abbey Rader West Coast Quartet: Second Gathering This disc is a long-awaited follow-up to the 2015 recording by the same ensemble. One again there is the familiar rolling thunder of Mr Rader’s drums that keep the musicians on edge and, as ever, in the present. However, far from keeping time, painting colours and shepherding melodic playing from the musicians on this set, Mr Rader facilitates the creation of a vast, extended soundscape framed by the spiritual and the material. His silences – and those of Drew Ceccato’s saxophones, Peter Kuhn’s clarinets and Kyle Motl’s contrabass – are sacred spaces resonant with creation. A note here and a phrase there… every single sound and silence, all helps the music ping into existence seemingly from a cosmic void.

The music of “Uncovering the Jewel in the Lotus” and “Finding the Still Point” is special. Melodic, harmonic and rhythmic paths unfold in a dazzling manner as each musician makes vivid responses to the other using angular phrases that seem to come from crisscrossing paths in an ambitious architectural edifice of sound. Mr Rader presides through all the edges and curves like a master, one conducting the performance of an existential score. Rhythm is present in all places yet not attached anywhere. Musical structure keeps opening us to the moment which “accepts” whatever and all possibilities especially those rare moments of ecstasy. The most memorable of these radiate from Mr Rader’s drumming that seems to radiate from the music like a corona emerging from the nuclear furnace of the sun. This is very possibly the finest musical offering from a great drummer.