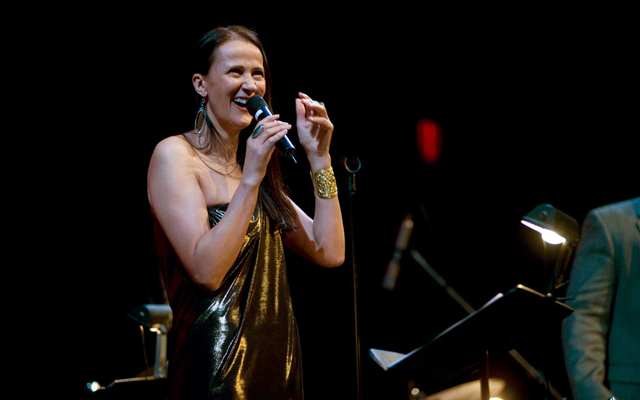 By now Tessa Souter has arrived. The songs on this album are sung with characteristic lyrical grace, rhythmic piquancy and nonchalant touches of contrapuntal interplay. Framing her sultry voice with Jason Ennis’ guitar, Victor Prieto’s accordion and Todd Reynolds’ violin, Souter pays homage to composers such as Wayne Shorter and Freddie Hubbard, Kenny Barron and Milton Nascimento. And she contributes two of her own songs. Everywhere, of course, she catches the flaring intensity and the nostalgic tenderness of songs onObsession. Her pure rather ‘instrumental’ tone has now acquired richer, more complex shadings. She floats her high notes exquisitely in a touching account of Milton Nascimento’s ‘Obsession’, builds to a climax of passionate intensity in ‘Afro Blue/Footprints’ and lustily abetted by Victor Prieto’s accordion brings a dangerous wildness to ‘Now and Then’. Souter’s art, founded on evenly produced tone and scrupulous care for phrasing and verbal clarity, has also, to my thinking, had a certain patrician restraint. She reveals, throughout the record, more impassioned temperament than before, whether in the fervent climaxes of Nascimento’s ‘Obsession’ “He leaves my lips wanting more/he leaves my heart wanting more…” she seems to sing – cosmic murmurs with fleet delicacy of the palpitating heart. 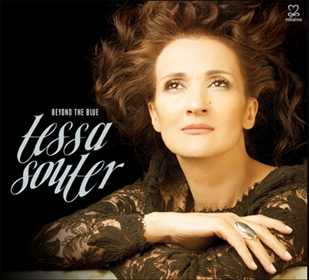 What is so attractive about Tessa Souter is also the sense of vulnerability she brings to music. It’s what draws you into her world, a world in which she seems to love with platonic as well as sensual intensity. Part of the reason for this is the utter femininity of her entire being. You want to love her back, but she is a creature so crystalline that you are instantly afraid that you will break her into a million pieces. Of course, this is probably no longer true. Souter is, after all, at the top of her game. But she is still a heart-singer. Beyond The Blue (Motema Music, 2012) holds her music as if in a crucible. Not only is the album a very ambitious one. It is huge leap of faith for Souter, who has written lyrics, recitatives and arrangements for music by Ludwig van Beethoven (Symphony Nr. 7, Second Movement on ‘Prelude to the Sun’), Alexander Borodin’s Polovetsian Dances in (Prince Igor on ‘Dance with Me’), Tomaso Albinoni’s (Adagio in G Minor on ‘Chiaroscuro’) and Joaquin Rodrigo’s En Aranjuez con tu Amor. The poignancy of her lyrics and vocalastics are so affecting that it hurts like a sword piercing the heart, wherein, by now her music is enshrined. I am not only seized by an elemental ache at the very core of my being, but I weep as I did when listening to Sheila Jordan and Jeanne Lee singing ‘The Water is Wide’ with Jane Bunnett eight long years ago.

Souter sings “Return, sing to me once more in a breeze/Come back even if it’s only in a dream/And take a hand un-held in (the)life of a girl/Of a girl with a dream of what might have been…” If I were uninitiated I would have been shocked to discover that Tessa Souter possesses such an abundance of profound dramatic issues, subtle characterisations, superb choruses of theatrical power, gorgeous arias and heartrending counterpoint with a glorious ensemble led by the ineffable pianist and frequent partner of Sheila Jordan, Steve Kuhn. I am reminded that Souter is a significant stage presence and her gifts in communicating music directly from and to the heart is truly special. Eight years after her first album Tessa Souter has proved herself to be one of the most delightful of singers in Jazz. Her pellucid tone, now flecked with deeper, richer colourings and precise, nimble coloratura give deep pleasure to the great music of Beethoven, Borodin, Ravel, Debussy, Albinoni, and Rodrigo as well as to Fauré and Schubert. In ‘Prelude to the Sun’ and ‘En Aranjuez con tu Amor’ and, indeed, everywhere else on the record Souter immediately impresses with her care for legato, her pearly, aspirate-free runs and her deft negotiation of the broad intervals. ‘The Lamp is Low’ from Ravel’s ‘Pavane’ is both radiant and sensuous, sung with a smile in the tone, while the warmth of her middle register and her strong chest notes are eloquently heard in her subtle, inward performance of Schubert’s Serenade in ‘Noa’s Dream’. 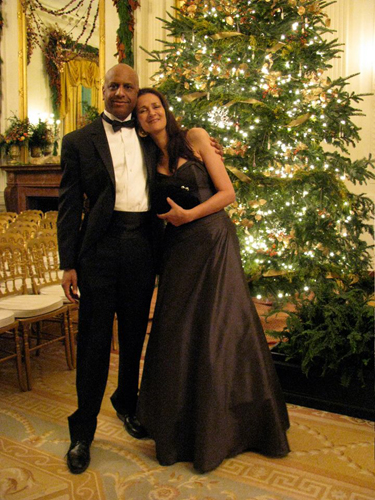 Suddenly I am afraid that I will break the spell if I turn off the CD player, to finish this piece in echoing silence of Beyond the Blue. I am right, of course. But it is time to pay homage to her most enduring relationship with someone who reflects her Venetian beauty often by keeping perfect time to her music as it soars. I had once asked her about Billy Drummond, the love of her life. It is a relationship that has elevated his musicianship to an impossibly new high. “Gosh,” she says to me, “My memory of the first time I played with him was that I was a bit intimidated by his talent. It took a few years for me to feel relaxed singing with him. He is very exhilarating to play with. He drives the solos with incredible dynamics and when he is driving you, it feels like you’re dancing on one of those giant circus balls. You’re scared you might fall off but it’s so exciting! I remember the first time he really let loose on one of my gigs, I just wanted to laugh, it was so brilliant. I still feel like that when I go to see him play with other people or in his own band, ‘Freedom of Ideas’. It’s on a whole other level! One time this guy at Smalls just jumped out of his seat and shouted: “Billy Drummond! Now that’s what I’m talking about!” He has played with many singers – most notably as Sheila Jordan’s first choice drummer – but there’s very little room to solo like that on a vocalist’s gig and that’s almost a waste when someone can solo like he can, as well as drive the rest of the band’s solos.

“And the soloists have to rise to the occasion – or else! Meaning, if they can’t hack it, it really shows. A great soloist, though, is pushed to greater heights. Billy’s commitment to his musicianship is totally inspiring, too. I’d never been involved with a musician before and it was a real education. He listens to a lot of music that inspires him. And he practices off and on all day. An engineer once said to me they thought his drumming had improved since he had met me five years before and I said, “No, that’s not me, that’s five years more practice!” Recently the same person said that of all the drummers they work with (and they work with all the very best), Billy is the only one who is always evolving and developing, which I realize is true. Billy Hart told me on several occasions that sometimes he is driving and listening to WBGO on the radio and a drummer comes on who is so good, he just has to pull over and listen, and when that happens, it nearly always turns out to be Billy. He doesn’t rest on his laurels and that’s because he’s always trying to be better. He is constantly evolving. That’s something to take on. You should never feel good enough for yourself.” This is also something that I feel about Tessa Souter. Through four breathtaking albums she has aimed music in which each line is fashioned into a perfect arrow, gleaming as it speeds towards the heart.