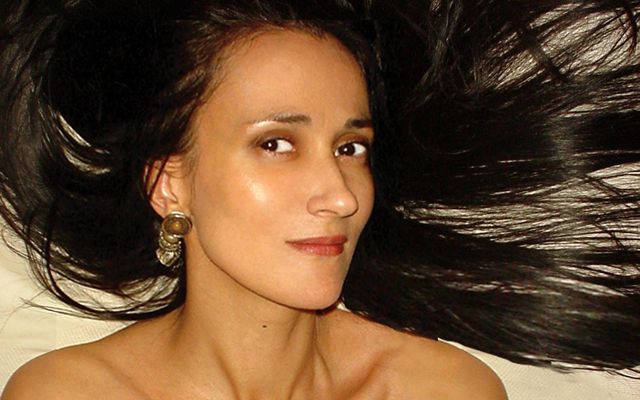 “All along I secretly fantasized about becoming a singer but I didn’t think it was any more than that – a nice fantasy. Then, I moved to San Francisco when my son was 20, and a friend took me to karaoke where, one night, I met someone who became a good friend and then boyfriend, who insisted that I should be a singer. We would argue on the way home from gigs because he wanted me to ask to sit in and I wouldn’t. I was very nervous and not confident. I still struggle with that. He would say things like: “There is a level below which you cannot sink!” And “Your bad is other people’s good!” Ultimately, our relationship ended, but before it did, I made more effort to go to open mics and jams hoping that maybe it would make him fall back in love. But to no avail. However, even no longer in love he was extremely supportive about my singing and that gave me more confidence because I knew he wasn’t biased. Whenever I sang people would ask where they could hear me sing and the next thing I knew I had a regular weekly gig in 1999, which lasted for six months. That was the beginning.” 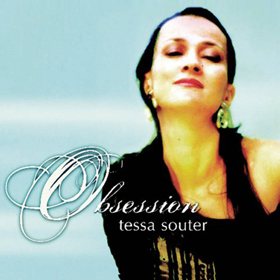 Souter is, of course, being modest about herself. I can only imagine how audiences received her even then as she made her way through the rough and tumble of her vocation to be a musician and a vocalist. ‘Humble beginnings’ are often portentous. Listen Love was certainly just that. ‘Willow’, a song by Pat Martino, one to which she wrote the lyrics tell that kind of story. Looking forward to Day from what seems like an eternal Night can bring some respite to the hard slog of trying to make it in the world of music. Reaching heaven in Night of Key Largo is the focus of life – and love lost, sometimes irretrievably. Here too Tessa Souter is sublime. On the title song, she conjures breathtaking moments in film noir depicted by the stars of the 1948 film Key Largo, Humphrey Bogart and Lauren Bacall. The glamorous couple is recalled in Bertie Higgins lyric: “We had it all/Just like Bogie and Bacall/ Starring in our own late, late show/Sailin’ away to Key Largo. (In the film, though, Bogart and Bacall do not sail to Key Largo; Bogart arrives on a bus, and Bacall is already living there.) The lyrics also draw from the film Casablanca, in the lines “Here’s looking at you, kid” and “Please say you will/Play it again”.

Indeed from Souter’s lips the lyric is couched in such poignant terms that it is perfectly possible to imagine that she sat down and wept with the wistfulness of writing the lyric herself. There is always an element of soul-searching in Tessa Souter’s interpretation of music. ‘Key Largo’ is one of the most touching songs in the set, beautifully and subtly sung by Souter with the colours of the ‘orchestral’ accompaniment discreetly etched in. There is a quiet ardour about Souter’s interpretation when the text answers Bogie’s demand for a mirthful song with a sad question. Souter enunciates the lyric as if with a twist in the gut and a sudden, sad gasp of breath. Almost all songs are crepuscular in their settings and Souter sings them with shades of pensiveness. On occasion, as in ‘So Many Stars’, with Kenny Werner’s anguished chords the vocal line is cast almost in free recitative burgeoning into rapturous melody, with Romero Lubambo making sure that the rising guitar motifs in the harmonic parts define the ‘lightening’ of the lyric. Contrasted with that is the cosseting melody of ‘Slow Hot Wind’, with woodwind textures thoroughly familiar with the composers’ persuasion and with Souter finding a slight catch in the voice to express the song’s lines: “Some days/It’s too warm to fight/A slow hot wind…” I realise, as if I needed any further convincing, that Tessa Souter relates to song from some kind of real-life lived experience. So deeply does she inhabit her songs?

But Souter is always modest about her abilities. She always defers to a mentor. It’s not that she is diffident about her abilities anymore. But she has a very real sense of her place in history and she attributes that to some musicians who have been ley to her development. She tells me about one of the most important influences of them all: Mansur Scott. “I first met Mansur at a jam, she says. “He so wise, I used to call him my guru. We spoke almost every day (sometimes more than once) for many years. As a singer, it was hard to put your finger on what it was about him that was so mesmerising. 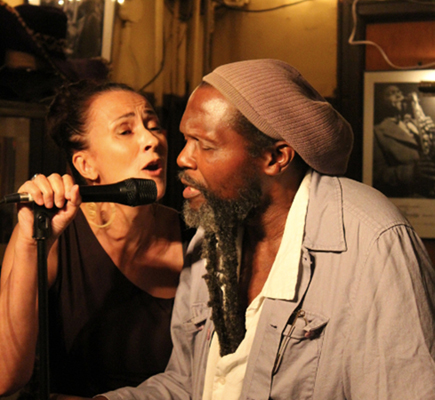 He had a lovely voice, yes, but it was more than that. He didn’t use it all that much. Just from time to time its beauty would peak through, which made it all the more thrilling. I remember the first lesson I had with Mark Murphy, he asked me why I held such a long note and (to be honest), I confessed that it was to show off how long I could hold it, and he said “Yes, people with beautiful voices have a tendency to prolong notes.” Well, Mansur never did that. He wasn’t afraid to even speak a lyric, if that’s what was called for. His singing and expression was never not in the service of the music and the story. He was always saying to me: “Sing your story!” And “No one else can sing your story!”

“And he was always so present and that in itself, I realise, is hypnotic. Certain songs he would do were so definitively his that I still can’t bear to hear them done by anyone else – particularly ‘The Nearness of You’. Not even famous singers have done it like he does. He was also always the very first person I would call to sing my compositions to on the phone. He would invariably say, “You’re a griot!” Very rarely, if he didn’t think it was good enough for me, he’d say, “I think you need to work on that some more”. But mostly he loved everything I did first time round. It was like having a cheerleader on tap. You could call him any time day or night and he’d be there for you. He’s an amazing person. Mansur Scott was probably the first person to sense Tessa Souter’s nearness to ‘the heartbeat’ He is a singer of heart-music’ himself. But it also takes tremendous courage to take a chance on a singer who is so ‘so close to the bone’ so as to touch every raw nerve in the body with her music. Jana Herzen of Motema Music is another such person. A vocalist herself, Herzen signs Tessa Souter to her young label and she enables the release of Obsession (2009).