Like too many other musicians – especially black musicians – of his and almost any era, the incomparable composer, arranger and pianist Tadley Ewing Peake “Tadd” Dameron passed away young, on March 8, 1965 at the age of 48. However, like many of the geniuses of his day he blazed a meteoric musical trail all the way to the heavens before leaving the earth with an amazing repertoire of music, the beauty of which is still enjoyed and celebrated today. Sadly, like many artists, Mr Dameron’s music has been kept alive by just a handful of musicians who are inexorably drawn to its riveting beauty.

It is no accident that Mr Dameron’s music emerged from his pen the way it did. In 1947 he told an interviewer with Metronome magazine that, “There’s enough ugliness in the world. I’m interested in beauty.” And every time that a black dot appeared from his pen onto staved paper he kept his word. And as his fingers – and those of many others – made the music leap off the page and float into the rarefied realm musicians and listeners around him who were paying attention discovered a striking new voice in virtually all music; not just Jazz.

Composing nearly all his glorious repertoire during the Bebop era, Mr Dameron stood out among his peers as he brought form to the kinetic new music. He said his sense of harmony came from the classical impressionists. “It’s more on a vein of Debussy or Ravel,” he once told the radio host, Harry Frost. “I try to make it flow. 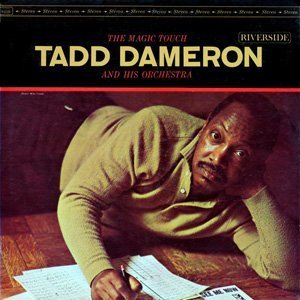 Try to make everything go — you know, it’s just like reading a book. It’s a regular story. You just can’t have one idea and jump to another one. I try to make it flow coherently.”

Embracing the new sound of Bebop, with its driving rhythms and difficult harmonies, Mr Dameron began writing for the new movement’s pioneers, Charlie Parker and Dizzy Gillespie. Soon his charts such as “Hot House” became a bebop standard, as did Dameron’s compositions “Good Bait” and “Lady Bird”. Following this Mr Dameron started arranging for Billy Eckstine, who led the first bebop orchestra.

Throughout the 1940’s and 1950’s, Mr Dameron worked with everyone who was anyone in jazz, from Miles Davis to Artie Shaw, Count Basie to John Coltrane. An enormous amount of his recorded output was also made with the incomparable trumpeter Fats Navarro including such magnificent recordings such as the 1948 classic Good Bait for Riverside.

Years later, the composer, arranger, educator and saxophonist and writer Paul Combs took notice. While Mr Combs is not alone among musicians to recognise and pay homage to Mr Dameron’s music (Jimmy Heath, Kenny Barron and Slide Hampton are others) Mr Combs went the distance and then some. Mesmerised by Mr Dameron’s music since his teenage years, Mr Combs dug deeper than almost anyone else and came up with the wherewithal to write an extraordinary (and the only) comprehensive biography of Mr Dameron. The book, Dameronia: The Life and Music of Tadd Dameron was published by the University of Michigan Press in 2013.

Six years later Mr Combs also finally recorded his homage to Mr Dameron by unearthing a host of rare gems from the composer’s songbook. Although not as complete as he would have liked it to be Unknown Dameron (Summit Records, 2019) is a masterful production and includes not simply rarities but completely unheard and certainly unrecorded music by the inimitable composer. All the music on that album has been arranged by Mr Combs with a larger ensemble. Everything Dameron touched had one thing in common, says Paul Combs, “Almost everything that he writes has a very lyrical grace to it.” All of this unfolds throughout Mr Combs’ arrangements of Mr Dameron’s work.