There are few things more eternal than the sound of joyous, immutable nobility and bluesy melancholy that rises to eminence from the tenor saxophone of Sonny Rollins. The gravitas of this great musician may have deepened over the years, but it was born a very long time ago; way back in his youth, in fact, when he had made up his mind that he was going to become the master of one of the most ubiquitous instruments in Jazz: the tenor saxophone. Over the years his virtuosity grew to near impossible levels of excellence, as he remained – unlike so many of his contemporaries [as well as like others who came after him] – lovingly dedicated to the big tenor sound of his saxophone. Also, as he advanced in years, the wildness of youth gave way to the well-honed wisdom of experience, but always beneath it all lay the brimstone and fire of Jazz, forged in the fire of the Blues. 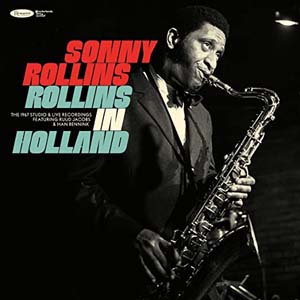 Another characteristic of Mr Rollins’ playing was the atomic energy of his playing. He had so much of it that it seemed to overflow from the brim of his horn. Only Albert Ayler who came after him had a bigger and more energetic sound. But while Mr Ayler’s sound was more raw and visceral, Mr Rollins’ was more chiseled, the eloquence of which led to a legendary doffing of the proverbial hat by his good friend John Coltrane in song; one that was simply called “Like Sonny” [recorded on Thursday, March 26th, 1959], which attempted to capture – in a mighty minor blues – the towering elegance of Mr Rollins’ tenor saxophone sound. It is [also] a matter of great significance that even while Mr Coltrane evolved into an outward-bound improviser and experimentalist, Mr Rollins never wavered, yet branched out like a mighty oak, yet always rooted in the Blues.

The heft of Mr Rollins’ playing has been magnificently captured in Rollins in Holland, one of the most extraordinary issues of classic material by any artist on the Resonance Records imprint; and this includes anything by Bill Evans and Wes Montgomery that George Klabin has produced together with his co-conspirator and musical sleuth, Zev Feldman and his grandmaster of re-mastering, Fran Gala. The repertoire of this splendid two-disc set brims over with the shimmering effervescence of Mr Rollins’ big, fat and round notes that bubble and boil over with thermal energy out of his saxophone. He is brilliantly accompanied here by bassist Ruud Jacobs and the inimitable drummer Han Bennink as they travelled in 1967 through the Netherlands, leaving set after set of memorable performances wherever they went.

Throughout this classic repertoire there is always a sense of Mr Rollins being completely in control of melodic, harmonic and rhythmic conception. These were the early days when the tenor saxophonist boldly eschewed the use of the piano, forever de rigueur in Jazz for the chordal wall of sound that the instrument provided upon which towering improvisational architecture could be created by soloists of every persuasion. Instead, in this trio, Mr Rollins reigns supreme, calling the shots. He alone calls the changes – indeed every change in mood and structure – and those of us who have seen him in performance can just imagine [from this audio-only document] his body bending incessantly back and forth as he coaxed each chain of notes, each phrase in every song. Alongside him, of course, Mr Jacobs and Mr Bennink thunder along, dancing in step with him and skipping out of the way whenever he barreled his way ahead of them through song after song.

The repertoire itself is classic-Rollins music; as always he takes music that we think we are familiar with and turns it all inside out and up and down and round and about. Mr Rollins charges ahead right out of the gates in “Blue Room” on disc one. His touch is even, convincing and stentorian. He uses his considerable technique beautifully; his arpeggios, which whip and curl, combine logic and continuity with magic; his double-time dashes are parenthetical and light up what they interrupt; his long single-note passages continually pause and breathe; no tempo rattles the clarity of his articulation, which has a private, singing quality. This makes it especially suited to turning standards such as that one and others like “Love Walked In” and “On Green Dolphin Street” into proverbial “Rollins’isms”: songs which others wrote but he has stamped with his own hallmark of authoritarian splendor time after time and then some…

Add to that the fact that Mr Rollins is adventuresome throughout; an oblique instrumentalist. This, of course, stems from the fortitude and daring of his own compositions, one of which makes its way onto stage in the form of “Sonnymoon for Two” and is represented by two separate performances, one on each of the two discs. And then there are the Miles Davis compositions “Four” and “Tune Up”, the dynamic architecture of which Mr Rollins deconstructs before rebuilding them in his own image and likeness, drawing Mr Jacobs and Mr Bennink in on the act with him. On those and every other song, be prepared to be entranced by as are singularly elegant with harmony and rhythm tapping at the hull of melody which Mr Rollins tests and re-tests for soundness, invention and ultimately for unforgettable adventure.

As with every re-issue from Resonance, the team led by George Klabin work meticulously to preserve the best sound quality and recast that which is perilously close to being lost. And so, production values are superb throughout these two discs. Even when the captured sound of the originals on the set from Academie voor Beeldende Kunst in Arnhem on May 3rd, 1967 seems to suffer from sub-standard acoustics [compared to the pristine acoustic environment of the VARA Studio in Hilversum and the Go-Go Club in Loosdrecht, both from May 5th, 1967], Messer’s Klabin and Gala make a heroic effort to “restore” quality that simply wasn’t there in the first place. But we should be prepared to put up with a little more tape hiss in exchange for quality music. After all this music by one of the greatest masters of all time and it is, as always, something to die for…