Of course Turiyasangitānanda is absolutely right. This is why we can never be able to relate to these works purely as music, in musical terms. They are, after all, as incantations and music; in their very ephemeral state, yearnings experienced in the deepest part of her being; in her spirit and her soul. For these very same reasons Trane’s late music was often misunderstood even by his most diehard followers and fans, the greatest aficionados and even the most accomplished music critics: his music too came from the same place as Turiyasangitānanda’s. They fed off each other and I firmly believe that Trane, were he still with us in the earthly realm, share the same space as Turiyasangitānanda; living what Sonny Rollins refers to in our world as the “the Golden Rule”. Although he doesn’t quite explain it in a classical way, what he refers to is what Trane called it: A Love Supreme; that poignant self-effacing “love” in the Greco-Christian tradition which is called agape [a word that comes from ancient Greek αγαπη, agapē interpreted as unconditional love. All of this, when transmuted to music, affects the art and craft in a profound way and it is impossible to separate the “technical” musicianship-self from the “experiential” or spiritual-self. Both are fused indelibly into one. 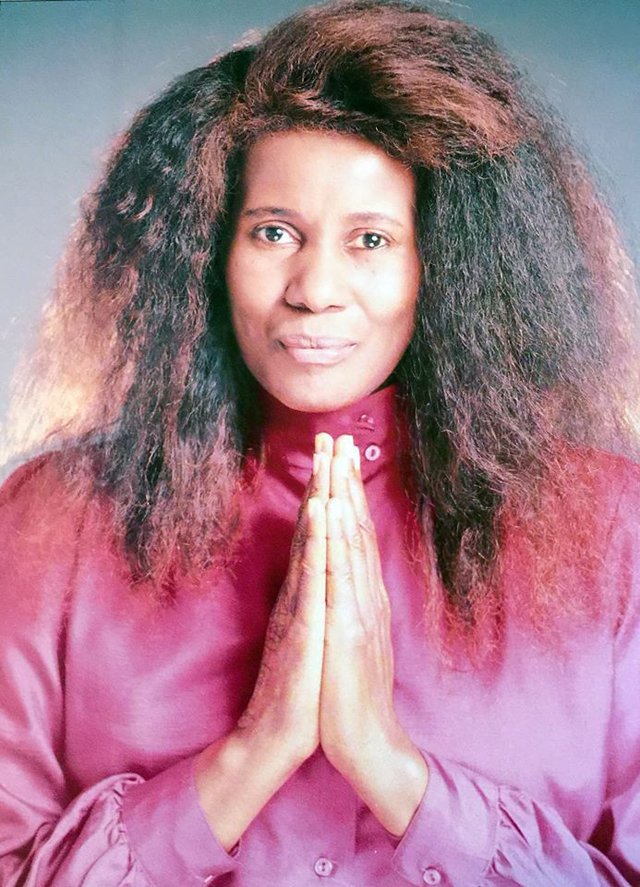 As with Trane, so also with Turiyasangitānanda. As light is produced when electricity is passed through the filament of a lightbulb, with [Trane and] and Turiyasangitānanda, consciousness is produced when spirit meets matter. In this instance the matter= the black dot of music [on paper and in the consciousness]. The meeting place is the soul, which is reincarnated in the music. When Turiyasangitānanda [and Trane] reached the moment of this ignition, a wholly new music began to flow essentially through the soul. Listening to “Om Shanti” “Rama Rama”; the eternal “Journey to Satchidānanda” “Er Ra” and “Keshava Muhara” it is clear that her soul is the creative power in this and the rest of the creative work. It is the origin of wisdom, clear vision, deep insight and a power that lifts these works and transforms them into a true art; a guiding light that uplifts humanity, culturally and spiritually.

By the tie these recordings were made, Turiyasangitānanda had become soul-infused and divinely inspired and she was able to leap with her prodigious foundation into the realm of an artist conversing with her soul. In these Ecstatic Works… Turiyasangitānanda had communed with her creative genius in such a way that she was a human being through whom the soul was working freely, wisely and passionately, teaching us of human destiny and revealing a world transcendent to the one in which we live. Between A Love Supreme, Meditations and Interstellar Space John Coltrane was headed there before he left his mortal body. Judging by the life he shared with Turiyasangitānanda there is every indication that he would have been right there with her at the time she complied these invocations called The Ecstatic Music of Alice Coltrane Turiyasangitānanda. In fact they might as well be listened to as if she were transmitting a celestial message from Trane himself; a message that she channeled through her body, soul and spirit. While here on earth we traverse the soundscape of her life, journeying to the proverbial Sacchidānanda through [and with] the blessed Turiyasangitānanda.

With this essay I owe a debt of gratitude to the “original” paradigm-shifter – Mitch Ritter – who sent me, out of the blue, an email [as he does under the banner of “Ulpanaylayo”] essay about Alice Coltrane Turiyasangitānanda. I’m a bit foggy on details, but I do remember hearing Turiyasangitānanda’s mesmerising Ecstatic Muisc… for the first time. A year or so later, having lost the link to that music and in desperation I asked Mr Ritter if he could point me in the direction of that music again. He couldn’t find the music, but we had begun to exchange emails about Turiyasangitānanda all over again. And thus my journey began anew…