In the early 1970’s Mrs Coltrane took tapas [a Sanskrit term for a variety of austere spiritual practices, something that she used to describe her own suffering], which led her to seek spiritual guidance [first] from the guru Swami Satchidānanda, and later from Sathya Sai Baba By 1972, she abandoned her secular life, and moved to California, where she established the Vedantic Center in 1975. By the late 1970s she had changed her name to Turiyasangitānanda. She was the spiritual director, or swamini, of Shanti Anantam Ashram (later renamed Sai Anantam Ashram in Chumash Pradesh) which the Vedantic Center established in 1983 near Malibu, California. Once ensconced at the ashram, Turiyasangitānanda – as she was now referred to permanently – grew silent, eschewing music almost completely in favour of chanting devotional songs; what are known as kirtans and bhajans to the universal Godhead – in her case now that became the Hindu trinity of Brahma [the Creator of the Universe], Vishnu [the Preserver of the Universe] and Shiva [the Destroyer of the Universe].

It was probably only a matter of time, considering that this was a seamless discovery for a woman born into Gospel and already wise to the Christian Trinitarian experience. But she made other recordings too; before her reincarnation as Turiyasangitānanda. One she made with Joe Henderson entitled The Elements is particularly significant. The pairing of her instruments – harp, piano, tamboura and harmonium – was, as ever poignant; her playing always elevated both music and spiritual yearning to a rarefied realm, where both pursuits belonged. The wild questing, however, had receded somewhat, making way from a sense of peace – musical content notwithstanding. Her pairing with another tenor saxophonist was no mere coincidence. Mr Henderson’s playing comes from an altogether different place than – for instance Pharoah Sanders’. But in some vaguely insular and very elemental way Turiyasangitānanda was clearly missing Trane. Her retreat into silence had probably helped her get over – among other things – earthly loss. It certainly seemed to bind her again to Trane’s spirit and his soul, and when she began to play publically again it became exquisitely evident in the music. 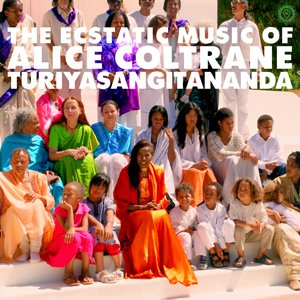 Perhaps the most epic of all her performances was capture on David Byrne’s label Luaka Bop. The recording was entitled The Ecstatic Music of Turiyasangitānanda. The LP brings together music recorded [on cassette] during 1982 and 1995. It was, as the producers said: “a music she invented, inspired by the gospel music of the Detroit churches she grew up in, and the Indian devotional music of her religious practice. This music was only available through her ashram; they are her most obscure body of work, and possibly the greatest reflection of her soul.” At the centre of the photograph on the cover sits Turiyasangitānanda surrounded by fellow seekers, acolytes and neophytes. She glints somewhat at you, but her beautiful face – with that hint of a smile – is a picture of calm. There are ten chants – each of which is lengthy – on the double LP. Turiyasangitānanda describes the music: “I do get very deeply engaged spiritually in the music, because it’s a spiritual language for me, it’s not a musical language. I’m expressing, articulating deep feeling and deep experience in life, in spiritual life, in God.”

That’s a very deep explanation of where she is in this [final] period of her life on earth – intuitively and cognitively. When you listen to the music you understand completely what she meant by that statement. You also become completely subsumed by the inexorable and elemental waves of calm in the music’s melodies, harmonies, and more than anything else, in the rhythm of its spirituality. More than anything else, it is, as Professor C.J. “Kees” Waaijman who studies spirituality in contemporary culture, [in relation to the major spiritual traditions] puts it in his book, Spirituality: Forms, Foundations, Methods [Peeters Publishers, 2002]: “[a] transmutation which aims to recover the original shape of [man] oriented at the image of God.”