The music on Earlier Outbreaks of Iconoclasm is one of the finest compilations of Milo Fine’s work with the Free Jazz Ensemble featuring Steve Gnitka. Both the multi-instrumentalist, Milo Fine and guitarist Steve Gnitka are spirited improvisers and manage the technical and polyrhythmic challenges of free jazz improvisation with complete assurance, bringing out a kaleidoscopic array of nuances and colour. While studiously avoiding traffic from each other the musicians still manage to buzz around each other like ferocious gnats encouraging each other, it would seem, to draw first blood. The work on piano, prepared piano and bowed cymbals by Fine may owe a debt to John Cage but his work on the clarinet seems to come right off the top of his virtuoso head itself. Likewise, his drumming up-ends all conventional notions of time and rely solely on pulse-generation. Gnitka is likewise inspired in his own way and his extraordinary imagination makes this series of recordings essential listening for the discerning listener. Milo Fine also notes that the title of Earlier… was conceived as a link to the Lp Another Outbreak of Iconoclasm (Two Eggs; Slightly Beaten) (Fusetron 010, 1994).

And so it was also that twenty years after the hatHUT/EMANEM recordings, the alliance between Milo Fine and Steve Gnitka continued to flourish and was also captured on Precision In Inexactitude (The Lotus Sound, 1996/7) as the Milo Fine Free Jazz Ensemble ploughed a lonely furrow across the US, exploring more koan/music challenges presented by free improvisations. Milo Fine, using a series of intense harmonics and intricate key organisation of the clarinet, Mr Fine also made further explorations in E flat instrument, drums, piano, m-drums II (electronically adjusted) and piano together with “slightly” prepared piano. 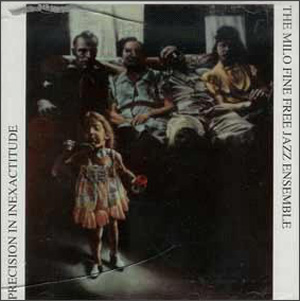 Two monumental sets of music make up the recording. Both Mr Fine and Steve Gnitka penetrate the appropriately riddle-filled music at an extraordinarily deep level and operate at such a refined level of technique – tones and overtones impeccably articulated – that radically fresh expressive territory is plucked from the ether. During this audacious period it became clear that the biggest leaps were nigh.

Milo Fine’s music continued to be propelled through space and time and in 2003 he joined forces with his father and percussion teacher, the legendary Elliot Fine and the great mystic drummer Davu Seru. Percussion Music; Improvised, a mammoth double CD grew out of this iconic clash of drummers. Exploring the possibility of creating monumental, pulseless music made up of great blocks of seemingly static, but subtly changing, textures whose components parts flowed seamlessly in and out of each other. Right through the endless-sounding “Impressions In Sound”, an 11-part inward-looking, atmospheric Coltranesque work. The impact of “Impressions In Sound” is overwhelming; one moment it seems to evoke a vast cauldron of eternal, cosmic rhythm, another the thunder inside the drummers’ collective cranium. Texture is everything; there are no palpable silences, instead the music is punctuated by enormous note-clusters, in overlapping layers. The sculpted sound is radiantly beautiful, suggesting something bejewelled and glowing.

Perhaps Milo Fine was rejuvenated after a visit to London where he made a series of recordings with a slew of British artists in April and May of 2003. The sessions featured Mr Fine in various settings, with string ensembles of various sizes together with vocal gymnasts and manipulators of electronics boards, and even an artist playing “invented instruments”. Meanwhile, Mr Fine performed on clarinets, piano and drum set. The double-CD package, Ikebana (EMANEM, 2004) ensued. Once again Milo Fine had hit upon a title that described an art from distant Japan that seemed to mirror his own: one (Ikebana) giving life to flowers and the other (also Ikebana) giving life to free improvised music in a similarly refined manner. Like so much of Milo Fine’s music, these magnificent studies virtually reinvent the art of free improvisations, creating an effect of mammoth complexity, and at the same time beckoning in its simplicity, founded on the composite interplay of rhythms and tempi.