Damnatio Memoriae, or oblivion, as a punishment was originally created by the peoples of Ephesos after Herostratus set fire to the Temple of Artemis, one of the Seven Wonders of antiquity. The Romans, who viewed it as a punishment worse than death itself, adopted this practice. Felons would literally be erased from history for the crimes they had committed. Lest I be pilloried or even burned at the stake for suggesting such a punishment for Milo Fine, it bears mention that his only connection with such chastisement is that he, unlike the apostate Herostratus chooses to consign all any and all forms of musical iconography to the cleansing flames of oblivion.

Thus, in the grander scheme of things, then, while Milo Fine may be an iconoclast such as was Herostratus for all the wrong reasons, Mr Fine may, happily, be considered a prime example such an iconoclast, no less, but for all the right reasons. However, as much as Milo Fine remains one of the most seminal figures in free improvisation musical artistry and one of the most controversial, he remains vastly underrepresented even on labels that purport to champion such music. 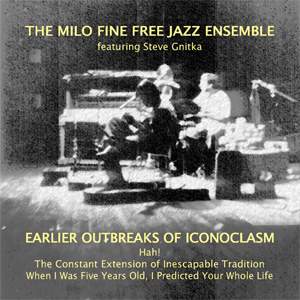 Perhaps the only major label to offer him a place to hang his shingle was EMANEM, an edgy British label curated by Martin Davidson, a champion of the music, who continues to have much of Milo Fine’s British and Continental output, some of which – with other brilliant improvisers such as John Russell and Lol Coxhill – might still be somewhere recorded but unreleased.

Milo Fine’s audacious output includes music for drums and percussion, piano, reeds, played solo and with all manner of instrumentalists for theatre, on stage and in the studio, where much of it has been also captured lately by Shih Shih Wu Ai, a record label based out of Minneapolis/St. Paul (curated by Milo Fine) that gets its name from The Four Dharmadhātu (Chinese: 四法界), is a philosophical concept propagated by Master Tu-shun (Chinese: 杜順; 557-640 CE), the founder of Hua-yan (Chinese: 華嚴) school, which in turn builds upon and is a variant of the Dharmadhātu doctrine. The label name – suitably “koan-like” – seems to itself expand on Milo Fine’s music, which in its meditative incarnation seems to be propelled by the same mind-body relationship embodied by The Four Dharmadhātu:

The five senses are connected to the perfection of action, Samjna (cognition) is connected to observing knowing,Manas (mind) is related to universal knowing and Alaya-vijnana is connected to great mirror knowing. This is certainly what emerges in the energy of Mr Fine’s Earlier Outbreaks of Iconoclasm, an album of three separate recordings, two of which – Hah! and The Constant Extension of Inescapable Tradition – were originally curated on the hatHUT label. Those two recordings were made in 1976 and 1977, a time when, teaming up with the guitarist Steve Gnitka, Milo Fine began to shape his most famous ensemble The Milo Fine Free Jazz Ensemble that became the most fruitful vehicles off early incarnations of the music he began to express in the late 1960s through Blue Freedom.