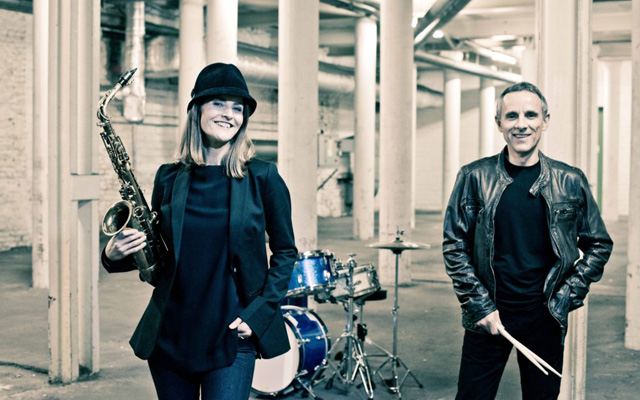 RDG: What drew the two of you together?

DM: Love. We met on a big band gig in New York. Later we spent time together on a Festival on Jazz Cruise where we were both performing with different groups. There, we had a chance to get to know each other.

KS: We couldn’t be more different in our backgrounds, characters, experiences growing up, and our emotional makeup. But we share a passion for life and music, for creating something together, for growing together. And somehow I recognized that in Drori right away.

RDG: How much writing do each of you do individually and together?

DM: I try to contribute one tune per recording. In our latest recording “Of Mystery And Beauty”, I contributed a solo drum piece “Cascades”.

KS: i write on the piano, play the chords and sing the melodies or play them on my horn. Sometimes a song marinates for quite a while before I find the right vibe, the right turnaround or progression for it. Once I have a general idea of the song I invite Drori to play it with me and he always has great ideas for arrangements. And in the rare event that he doesn’t have a suggestion he’ll say “we need a drum solo here” (smiles)…

RDG: Drori, do you think of yourself as a ‘drummer’ or a ‘percussion colorist’?

DM: I think of myself as both. My role is to offer rhythmic drive and groove to the music and provide forward motion but also to color and orchestrate. I have beautiful drums and cymbals that offer infinite shades of color. 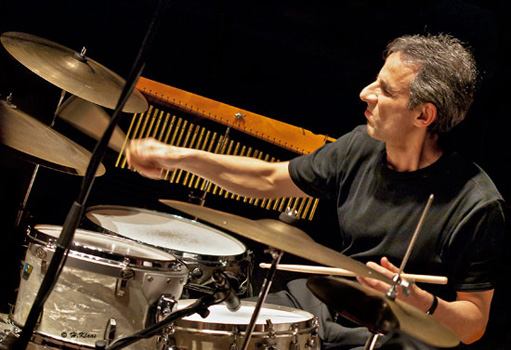 RDG: Have you both ever thought of doing a vocal album?

DM: Not with our quartet KLARO! I have recorded and performed with lots of vocalists.

RDG: The power to convey meaning and emotion with words is something I envy all the great singers. However, I have not thought of adding a singer to the group. But I do aspire to develop that same raw power of expression on my saxophone.

RDG: If you had to pay tribute to a mentor, who would you choose for your homage, Karolina?

KS: The wonderful Austrian tenor and alto saxophonist Karl Drewo who was my teacher at the university in Graz. He was such a soulful and spirited player and I’m very thankful to him for sharing that soul and spirit with his students.

RDG: And you, Drori? Who would you pay homage to?

RDG: Which European classical musician does each of you admire most?
DM: I don’t have one in particular. I have some favorite pieces like the Bach Goldberg Variations.

KS: Beethoven. I still remember my father sitting in the living room with his giant headphones on, wildly and unrestrainedly air-conducting the Vienna Philharmonic playing Beethoven’s symphonies. As an adult, I wanted to find out what had moved my down-to-earth forest ranger father to the degree that he would do something so out of character.

RDG: And which jazz musician is (each of) your first love?

DM: There are so many musicians that I love that it would be unfair to just mention one. I cannot pick one. Here are some that come to mind at the moment: John Coltrane, Bill Evans, Charlie Parker, Bud Powell, Stan Getz, Paul Desmond, Booker Little, Miles Davis, Max Roach Elvin Jones, Tony Williams, Thelonious Monk, Wayne Shorter, Sonny Rollins, Wes Montgomery, Ornette Coleman and many, many more…

RDG: Would you say that your music is composed and improvised and if so where do you put the most emphasis?

DM: Both are important if you are going to write a tune with a melody and harmonic form and structure to improvise on. If you have a great melody with interesting harmonic movement, this will inspire greater improvisation.

KS: I write very simple tunes. I like the freedom to create without being hampered by too much complexity. I’d rather create the complexity on the spot, if that’s what I feel like at the moment, as opposed to dictating complexity in the compositions or arrangements. I love what musicians like Stefan Bauer and David Friedman (both outstanding vibraphonists), the wonderful Rainer Böhm on piano, and many others like Bassists John Goldsby, Ingmar Heller, Steve LaSpina or guitarist Cary DeNigris have contributed to our group. I like to just provide a canvas or loose framework for everyone’s ideas and then get out of the way and let the music play itself.