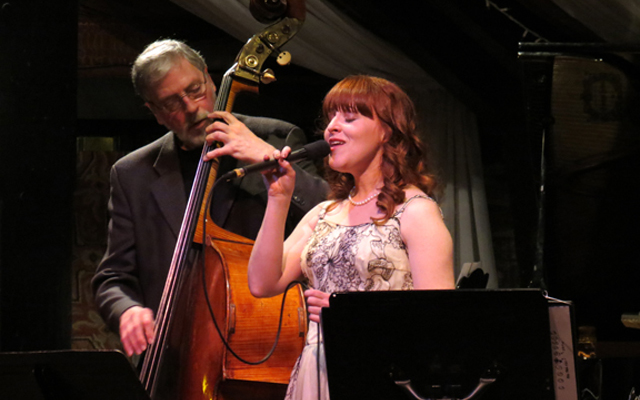 Fortunately this is not the case with Thompson’s long and fruitful artistic relationship with one of the most enchanting singer Diana Panton. Together with guitarist Reg Schwager, horn player Guido Basso and others, Thompson has written for, played on and co-produced eight superb recordings, the last two being wondrous trio performances on Red and Panton’s fairy-tale-like children’s disc, I Believe in Little Things, which – along with Panton’s other records is making a serious impression on audiences in the US as well. These recordings have propelled Diana Panton into the spotlight of the Canadian music stage forever. Thompson’s name, too, appears in lights wherever they perform, which just happens to be in Canada, Japan and even (Vladivostok) Russia. Through it all, Panton remains grounded in her art, blissfully unaware of how attractive she is as a musician as well as a person. Don Thompson is very much the same. His persona is completely Canadian and self-effacing. Through the years he has won a clutch of awards including three Juno Awards. He has also been decorated by the Governor-General and (by virtue of our country being part of the Commonwealth of Nations) by the monarchy with the Order of Canada, the equivalent of an OBE. Every award has been richly deserved and one Don Thompson is unequivocally proud of. I suspect that a recognition he is also most proud of might be the recognition he received from The Art of Jazz, for his contribution to Jazz. The award came with a bursary as well. Typically, Don Thompson’s thoughts turned to music no sooner than that award was given to him, giving all of it back to education, something he is passionate about; something he never formally had while growing up in Powell River. This is the measure of the man I talked to and whose genius continues to thrill and enrich music wherever it is played and appreciated; wherever it elevates men to the Divine.

Acknowledgements:
I would like to thank Jane Bunnett and Larry Cramer for introducing me to Don Thompson. I am also grateful to Diana Panton for spending an afternoon with me as we talked about music and about how much Thompson had enriched her own musical experience. Finally I am deeply touched by the fact that Don Thompson gave me so much of his precious time, sharing his music with me and providing me with much of his repertoire that has not made it to disc, especially the performances with Sonny Greenwich and Norma Winstone, which will probably never make it to disc. This one’s for you, Don…

With Désirée Till and Coenraad Bloemendal