Digging deep, Pullen made a spirit journey, as he had done years earlier with Beaver Harris on A Well Kept Secret (Shemp, 1984). He began to explore the musical territory from Africa to Brasil and back. His new band, African-Brasilian Connection, began to tear up the sound waves again. Kele Mou Bana (Blue Note, 1991) brought together Senegalese master Mor Thiam with Brasilians Nilson Matta and Guilherme Franco, and Panamanian Carlos Ward. It seemed that the music was taking a swirling path to encompass the heart of jazz and blues—the African and Afro-Brazilian roots… once again, a visit to the “Goree” of history.

The music embraced voices and chants. The circle was both widening and closing in, with the music echoing cerebrally and in every heartbeat. Pick almost any chart over thirty years, but to keep it simple, listen to “Mr. Smoothie” from 1986’s Breakthrough (Blue Note) and then to “Listen to the People” on Kele Mou Bana or “Ode to Life” on the eponymous album. The former all sounded bright and carefree, but on the latter there was something urgent and nourishing. Perhaps it was a sense of mortality and how could you blame Pullen? By November, 1992 George Adams was dead too. And it was not long before Pullen too would be diagnosed with the cancer that ultimately took his rich life away as well. He was always deep and it was reflected in his music. But he rarely talked about what he believed in. One instance was when New Beginnings was released. “Warriors we must be in the continuing fight against the insanity of hatred, racism, homophobia, the madness that is destroying our planet and all the ills that keep our society divided. Unless seeds of peace and love are planted, changes made, a new consciousness embraced, all that can be reaped is whirlwind.

“Silence about issues surely equals death. (Echoed in “Silence=Death”) The ‘powers that be’ are at war with nature, the ozone layer, the air we breathe, the water we drink, the trees, the grass and all the things that make life and this planet beautiful.

“Once upon a time this was not so. It does not have to be so today. We can begin anew and rededicate ourselves to peace and love and harmony.”¹⁰… 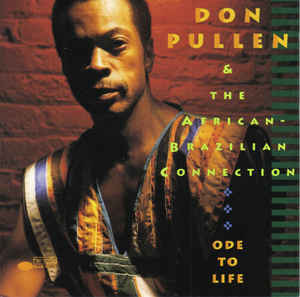 That was in 1988. Now, at the time of presenting Ode to Life in 1993, the urgency was a becoming a benediction. Mingus… Dannie… George and now me, Don… Oh, Mama… The final score took shape towards some kind of finality as well, then. Pullen’s magnum opus, “Meditations on Integration…”— his “Ninth Symphony,” with its own “Ode to Joy…”—became Sacred Common Ground (Blue Note, 1995), a collaboration between the pianist and his African-Brasilian Connection, with Joseph Bowie and the Native American Chief Cliff Singers—a group of Kootenai drummer/singers from Elmo, Montana. It was bound for glory. It sang of an uncomfortable truth that Pullen had always sung through his music, then written for a record in 1988 which had now become the underlying score of his final masterpiece.

How he must have missed Adams and Richmond and Mingus and those that went before him. How he worked night and day to finish his perfect score before he was robbed of his life can only be imagined with a chill. What it must have taken to get out of bed at times to go into the studio and record. “You know,” He told Michael Cuscuna, “we throw around a lot of words like courage. You haven’t seen courage until you’ve sat in a waiting room for four, five and six year-olds who are literally dying of cancer. You can’t imagine their strength and spirit.”¹¹

And suddenly it all begins to make sense… Love of the planet into which he and we are born… the one we do not own, but take care of for our children and our children’s children’s children… The one we are destroying, the one the indigenous peoples knew long ago how to care for… but whom we destroyed with our hate. This was the poignant significance of the masterpiece, Sacred Common Ground. It digs deepest into the heart of Pullen’s very being. Inward looking and at its very depth spontaneous improvisations clash and swirl around, energized by unbridled creativity—a daunting task, considering his physical state. Yet it all comes together in a score that features vintage Pullen pianism melded with vocalastics of an almost otherworldly nature. And, for the first time in centuries, a musician was able to bring the ancient wisdom of Native America into the realm of Afro-American blues and jazz, in a score that is old, yet new and, like its composer, of the past…in the present…and in the future.