That same year Pullen made one more solo record, the last he would do with his own work on it. Evidence of Things Unseen digs deepest into his heart and soul. What’s inside can never really get out, but once in awhile you just may catch a glimpse of it. Jane Bunnett once said that Pullen never really talked much about the cards that life dealt him and the ones he played in his own life, but this album is as close as it ever gets.

Sadly, the gig with Black Saint ended. It will not go gently into that night, as Dylan Thomas might have written about this end too. The Sixth Sense (1985) features a quintet with Olu Dara on trumpet, Donald Harrison on alto saxophone, Fred Hopkins on bass and Bobby Battle on drums. With Pullen pulling out all the stops, the record sings directly to the heart. Dara stars as does Harrison, who recalls the mighty rhythmic intensity of Dolphy. Pullen is stunning, preaching his lonely gospel and dazzling to excess.

Michael Cuscuna describes the impact Pullen and Adams, Richmond and Cameron Brown had on him in 1981, at a festival in Molde, Norway: “As much as I’d admired their individual artistry, I was not prepared for the impact of these four men together. They danced through tempos, harmonic shifts, styles and genres with the greatest of ease, never relaxing their creative reach and always stimulating each other. I wanted to tell the world about how extraordinary they were. The chance would come five years later when Bruce Lundvall signed them to Blue Note.”⁹ 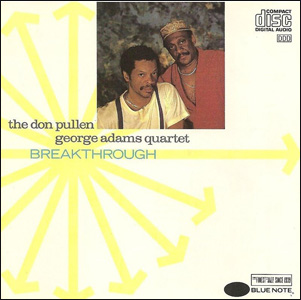 Indeed, it did. Breakthrough (Blue Note, 1986) was more than that. Brash yet sophisticated, it was down-and-dirty-in-your-face, yet exquisitely classy. Clearly the message was, “We’ve Been Here All the Time.” The Quartet—funny how Coltrane-esque that sounds and how just it is to give such credit as well— was at the top of its game. Sadly just one more record followed, Song Everlasting (Blue Note, 1987). “Sing Me a Song Everlasting” was to become the torchlight as the notes of the perfectly sent sunbursts of sound pierced the silence of the night—any night, even today. Contrary to what I had believed until this search for Don Pullen, the band broke up before Dannie Richmond passed on. There was talk of ‘difficulties’ with the reading of some music, but this would hardly have been the case. Ten years must have been a long time and restlessness may have caught up in the end… And the impulse, not just to look, but to also move forward…always. And, the, of course, Dannie Richmond died suddenly on March 15, 1988 and things would never be the same again. But that year, Cuscuna brought Pullen and Tony Williams together socially in Japan. Fortuitously, Pullen decided to do a record with Williams and Gary Peacock.

The breathtaking trio record, New Beginnings (Blue Note, 1988), followed. This could well be, even today, one of the finest piano records ever made. Exquisitely recorded by the great David Baker, Pullen’s musical expedition wove in and out of familiar sonic landscapes and shot brilliantly into uncharted territory. His supremely unique technique was in full bloom—unorthodox fingerings, crossed hands to play complex, counter-melodies; elbows to hammer out precise and percussive block-chords and knuckles to create splashing spirals and dazzling runs—made the music new again… and again and again. Especially on “Warriors” and the title track. The success of that album begat the last trio record that Pullen made, Random Thoughts (Blue Note, 1990). Pullen was becoming infinitely more introspective and the thoughts were far from random. “Endangered Species: African American Youth” is one of those songs that sear the brain, echoing with a power with which few could preach.

By now, Pullen’s musical canvas had grown larger, like so many geniuses before him. His tonal palette was growing. He was hearing new and infinitely more complex sounds in his head. Although, as always, because of his deep dedication to the music, he continued to play and even record with and in many different contexts—especially with Kip Hanrahan, Roots (and saxophonists Arthur Blythe, Chico Freeman and Sam Rivers) and Jane Bunnett (especially on the beautiful, New York Duets (Denon, 1989)—in his heart something huge was growing.