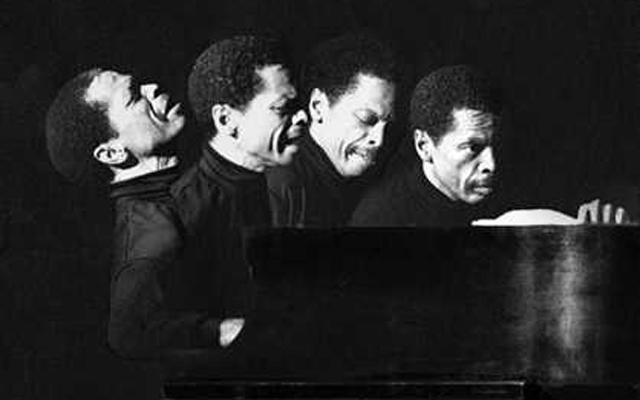 We find the key in Sroka’s Schenkerian analysis. In Pullen’s hands, dissonant glissandi, when the impulse to solo grabs him and he takes flight, become subsumed in the consonant harmonies of the music. Throughout the long piece, a sonic tapestry is being woven where the design of the individual threads appears and disappears as its master weaver waves his hands touching this note and that, sometimes gently, at other times in clusters with unfettered ferocity. Throughout, the song maintains its harmonic tonal structure, despite Pullen’s extravagant expeditions over a sea of dissonant glissandi, until dissonance and consonance find togetherness in a definitive harmonic bed of sound. It remains a fine example of the 32-Bar song only Don Pullen takes it ‘out’ and brings it back ‘in’ again. This is a masterful analysis. Borrowing appropriately from performance studies scholar’s theory of the engineered grafting of two (or more) dissimilar entities, Sroka gives this life to musical study, but finds that the entities, while forming a hybrid entity, still manage to remain separate, while in Pullen’s music, everything comes together…he has the gifted technique and is inventive to an extreme degree.

So we graduate to 1925 and to Jose Vasconcelos, a Mexican educator and philosopher, who wrote “La Raza Cosmica” both to challenge western theories of racial superiority and purity and to offer a new view about the mixing of African, European and indigenous peoples in Mexico and throughout Latin America. (But he may as well have been speaking of North and South America as well. No doubt he was discredited… and don’t we always? See what we did to Dr. Cheikh Anta Diop, the great Senegalese scientist who published his own thesis and many more deeply historical books on the African origin of civilization, who was likewise discredited after his thesis in Sorbonne in 1951. But we are off on a modal expedition here. Suffice it to say that the theory of mestizaje makes eminent sense when you listen to Pullen soloing on “Song from the Old Country” “Ah George, We Hardly Knew Ya,” and so many of his extraordinary compositions.

Like Coltrane and the quintet in 1965 playing “Father, Son and The Holy Ghost,” where the saxophonist dives in and out of a ‘consonant’ version of “Frére Jacques” as the ensemble flies unfettered through its deeply African and dissonant homage to the triune God. But it seems to me that Coltrane worked conscious and hard to give birth to the sound he was hearing in his head, whereas with Pullen it seemed to flow from the time he touched the keyboard, as early as when he debuted on record with Giuseppi Logan on The Giuseppi Logan Quartet (ESP, 1964). “Taneous” and “Bleecker Partita” are two of the early classic intimations of what was to flow from the heart and head, and from the fingers of Don Pullen.

But the 1960s were cruel. And they were hard on Don Pullen like they did everyone else. But he survived, unlike Logan. He did so as only Pullen can… by hunkering down and using his great gift of creativity and the Confucian character of bending like a supple tree in a ferocious storm. 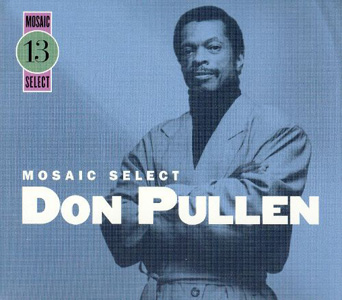 On October 1, 1964 he participated in the October Revolution in Jazz. “This is our music!” it said, but many were afraid—even musicians themselves. The music was so confrontational that almost everyone missed the whole point of it. They mistook the dissonant elements of the best music for a lack of ‘musical understanding’ and turned their backs on a host of musicians in the vanguard of the music that was so in- your-face that some felt it was a terribly revolutionary threat. And because the musicians refused to compromise in the way it was crafted, which was nothing new as Thelonious Monk, Charlie Parker and Dizzy Gillespie had done and faced the same animosity (even from knowledgeable) musicians twenty years earlier, audiences were antagonistic and the music fell into decline… Few musicians survived.

Pullen had nerves of steel… and he believed in himself more than anything else… In 1966 he and Milford Graves started his own label, Self Reliance Program, and released two long playing records, In Concert, at Yale University Volume 1 and Nommo (SRP, 1966). “The social and political aspects made it just about the right time for us to go into this venture. Musicians were thinking about controlling their own music. We weren’t going to sit back and wait for the Man to say, ‘Well, here. Take this crumb.’ We said, ‘We’ll do it ourselves.'”²