“Pullen aims arrows at souls on earth from an ancient place…from the present…the voice of the jazz-mother-tongue singing from the future.”

He is being carried on wings, a Black Icarus, further up, higher than the sun, so the wings will not fail this time. They carry him and the fingers of his left—and all those mad block chords from God knows where—and his right hand—running along the ebony and ivory keys drawing clusters of notes in elliptical swirls they call jazz, from knuckles and fingers into the rarefied atmosphere, where he hooks up for a gig in the sky. Mingus is there and Dannie Richmond, George Adams. He may just as well start the set with “Song from the Old Country.” They play “Big Alice…” Then some Mingus charts: “Sue’s Changes,” “Goodbye Pork Pie Hat,” and just before Byard and Dolphy replace Pullen and Adams, “Goree…”

Don Pullen has tricked death. He wakes from a long sleep and pulls out the charts in his head, just as Jana knows down below. The gig is huge. Even Mingus is looking forward to it as no one will drink and ice will not clink in glasses. But everyone will sit down and “listen to what we have to say as the cats play their asses off… This is our music. Finally we will be heard,” the voice in his head tells him. Don Pullen is flying right up into the peace of the infinite blue. Black up against the infinite blue… Mingus smiles as Brother Don aims arrows at souls on earth from an ancient place…from the present…the voice of the jazz-mother-tongue singing from the future… “Hello…”

I am in Jane Bunnett’s house. The idea is to talk with her after listening and learning and listening again to everything… all the music that she has ever made. I am curious about how she connects with people… puts her bands together. It is not just about finding people that can play your music expertly. There is more and it has to do with a spiritual connection and worshipping at the altar of creativity and no compromise. Hence the spirit-sensitive musicians of Cuba—especially the folkloric groups such as Grupo Vocal Desandann, and musicians from Brazil.

And then there was Don Pullen… Bunnett, (husband) Larry Cramer and Don Pullen shared so much! Music and life on earth and in the spirit world… The lines blurred mostly when they played. They too talked about it too… And of getting to the heart of things…

Now, Bunnett, Cramer and I talk about Don Pullen in the fading light… About their trip to Cuba together and to Brazil… Then Larry Cramer puts on a CD… And we are listening to New York Duets, to “Gratitude.” We are trance-like… And then Don Pullen appears in the fading light. I cannot say how it happens but I know that he is here, sitting by the large bay window. So does Jane Bunnett. No one says anything. Pullen wears a smile, enjoying the music from the other dimension where he lives. He once said that he never listened to his own music, always moving forward on to the next score… But now he has all the time to enjoy its many mysteries. 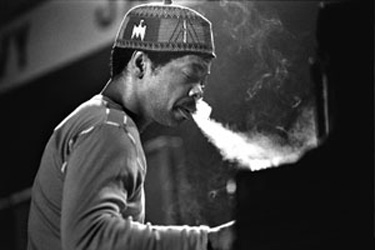 Suddenly it hits me: Pullen, the artist, the great nearly forgotten genius of a pianist, lives in a perfect continuum. He is at the heart of past, present and future. He lets us know as he plays brazen glissandos letting his hands and fingers run riot across the keyboard of the perfectly tuned grand at Jane Bunnett’s house. His solo appears to abandon the melody and all the harmonic changes that should ordinarily have made sense. Pullen is in orbit. He is telling a story of peace and love in a troubled world. He is asking us to look at what we have done to ourselves, by abusing Planet Earth. Further onward… Upward… Every once in a while, a familiar note, you think it is ‘back to the melody,’ but Pullen hears it differently… He charges off on another expedition… Folks have gotta know… there isn’t much time… The ideas come in splashes and sunbursts of sound… Notes fuse and separate… Every cluster and single note has its own bravely individual color… A blue ping… a blood red crashing cluster… Some are aimed like darts deep into your soul… others cascade and cure through the air… Where is the “Gratitude” for blessings received?

It is always the same every time Pullen plays… Somehow the old country is new again… Slavery is freedom… Blues and gospel… his playing is his sermon and everything touches every part of you. No ‘this is for you to think about’ and ‘that is for you to feel.’ The news and narrative of the song is in the wave of emotion that overwhelms you each and every time. That is why there is no separating past, present and future. Pullen inhabits everything when sits down and plays. And that is why you cannot separate the artist from the man… one subsumes the other and everything comes together in Pullen.