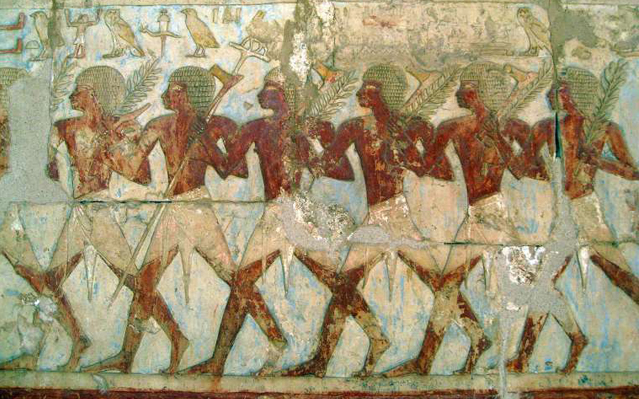 Chapter 9: Peopling of Africa from the Nile Valley

Diop, based on what was known in the 1950s, says that most people in Africa came from the Nile Valley, particularly in and near the country of Sudan.

Today we use genetic studies to work out ancient migrations. In Diop’s day that was not possible.

Diop based his ideas on two things:

They start out at the Great Water.
Cross through a land of short men.
Point back towards a region in or near Sudan as their starting point.

So the Great Water appears to be the Nile, not the ocean. And the short men are apparently the Pygmies, who still live in the middle of Africa and who were more widespread thousands of years ago.

The pattern of names shows the same. For example: There is a tribe that calls itself the Nyoro in Sudan and also one by that name far to the west in Mali.

The names Goula, Goule, Goulaye and Gilaye appear both along the Nile and again in West Africa.

There are people who call themselves Serer, Sere or Sara in Senegal, Central Africa and Chad. In those same places there are stone monuments that look like big penises. There are more such monuments to the east in a line that goes all the way to Ethiopia.

Diop believes the Serer built the megaliths as they slowly moved west across Africa.

One scholar, Dr Joseph Maes, disagrees, saying this: Anyone familiar with Black psychology can state almost categorically that these works which require a considerable amount of effort, without any immediate apparent usefulness, without any relationship to the natural functions of eating and copulating which alone interest the black man have not been executed by the black race.

This leads to Diop making an important point for his book as a whole:

This attitude, typical of the Western world when we are concerned, shows how absolutely necessary it is for us to dig out our own past, a task that no one people can do for another, because of passions, national pride, and racial prejudice resulting from an education distorted from the ground up.

Although Maes got most of his facts right, his racism affected how he made sense of them. Diop concludes: The magnitude of the doctor’s errors … indicates how necessary it is for us to interpret our own culture, instead of persisting in seeing it only through Western eyes.

Some points Diop makes about the history of Ancient Egypt from -3000 to -525:

1. The priesthood was largely independent.
Because they had their own lands. Sometimes the pharaoh was one of their own, but most of the time they simply acted as a state within a state.

2. Egypt never became a republic.
Egypt was ruled by kings throughout. Even when the pharaoh, the king of all Egypt, fell, the idea was that in time another one would take his place.

That set Egypt apart from the Greek and Roman world where revolution was common. Diop says there are two reasons for that: Egypt was too big and the masses too unlettered to stage a successful revolution across the whole country at the same time. A city here or there might be overthrown, but not the whole country.

Most people in Egypt were not slaves, so most people were not desperate and determined enough to overthrow the social order. On both counts Egypt was the opposite of many Greek city-states – and, say, Haiti.

3. The whitening of Egypt
Egypt started out as unmistakably black, as made clear from the old pictures of its early pharaohs.

Egyptian civilization – its mathematics, science, art, invention, architecture, religion, law, government and all the rest – were all in place by the 2600 BC, long before whites began to arrive in large numbers after 1300 BC. It has been the waves of light-skinned foreigners since then that have increasingly whitened Egypt down through the ages.Before 1300 BC, Egypt was far more advanced than Europe, Asia and Libya, the lands where whites came from. When whites did begin to arrive in large numbers, they came as barbarians, slaves, farmers and soldiers, not as a civilizing force. They had more to learn from Egypt than the other way round.

But from 1300BC to 525BC Egypt slowly fell behind Asia and Europe. It fought a long, losing battle to keep Egypt free from foreign rule.

The Delta especially became increasingly white: not just the people, but even the army and all but the top commanders. The Egyptians called them “Libyans”, whether they came from Libya or not.

From time to time whites in the Delta rose up against the pharaoh, either on their own or with the help of foreign armies. Sometimes Egypt would fall apart; sometimes order would be restored from the south, either by Upper Egypt or even Nubia.

Most Egyptians welcomed Nubian rule. They saw the Nubians as restoring the old ways of Egypt, bringing back the good old days. But it was not to last: in -661 Thebes, in the heart of Egypt, fell to the Assyrian army.

The Assyrians did not stay, but the Persians in 525 BC did.