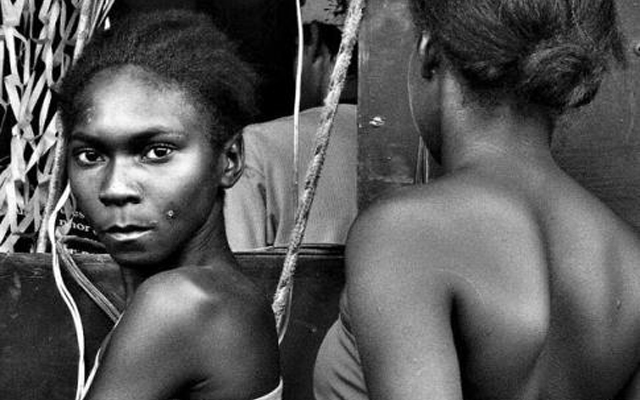 Chapter 7: Arguments for a Negro Origin

Diop says there are two main reasons to believe that Ancient Egypt sprang from black Africa:

It is what the Egyptians themselves and all ancient writers believed.

Ancient Egyptian culture had more in common with African cultures than with European ones.

Diop says the Egyptians and the ancient writers all say that the Egyptians either came from the south or were close cousins to those who lived there.

That south has been called different things by different people:

They all mean the same place. In fact, archaeologists were able to find its capital based on the writings of Herodotus and Diodorus of Sicily: Meroe.

Meroe is along the Nile in what we now call northern Sudan, not far from present-day Ethiopia. It was found to have 80 pyramids.

The ruins of Meroe: In Diop’s model the Egyptians came down river from Nubia. When Egypt fell under foreign rule from -500 onwards, Nubia became the centre of African civilization. In time it spread westward across the grasslands south of the Sahara, leading to the West African civilizations of Ghana, Mali, Songhai, etc.

In the white colonialist model of history, all civilization in Africa is due to light-skinned outsiders: Thus Nubia was civilized by the Libyans, of all people, and West Africa by the Arabs.

Ancient Egypt had a culture much more like that of black Africa than Europe. It had things like circumcision, matriarchy and totemism, which are common in Africa but rare in Europe.

By matriarchy Diop means property and leadership passing through the mother’s side of the family rather than the father’s. Even something like queens, therefore, were way more common in Africa than in Europe in ancient times.

Or take circumcision: Muslims and Jews practice it outside of Africa but it does not fit into any broader picture of the world. In Africa it does: both boys and girls had part of their genitals cut off to make them more clearly male and female, unlike the gods. The Jewish (and therefore Muslim) practice seems to come from Africa by way of Egypt.

In religion the Egyptians had many of the same gods as the Nubians and painted them black. Some of the stories of the gods take place in Nubia. All that would be rather odd if their religion came from Asia or Europe.

As to language, Diop noticed that even his native West African language of Wolof has certain features in common with Ancient Egyptian that cannot be accounted for by mere chance. For example, most of the pronouns are the same, the passive voice is formed by u or w and some words are a letter off from the same words in Egyptian: lad/nad (to ask), funa/fula (regular), lah/nah (protect, hide), etc.

Chapter 8: Arguments against a Negro Origin

Reasons why Ancient Egypt could not have sprung from black Africa:

Blacks are backwards and incapable of high civilization on their own.

Egyptians painted themselves dark red, not black, in pictures.

Blacks were slaves in ancient times.

The Stela of Philae calls the people south of Egypt “blacks”.

Take each in turn:

1. Blacks are backwards and incapable of high civilization on their own.

West Africa was arguably more advanced than Western Europe in the 1300s. The accounts of Arabs in the 1300s and the first Portuguese to arrive there in the 1400s make that clear.

Further, Ibn Batuta, travelling through West Africa in the 1350s, said the roads were completely safe – no one tried to rob him – and that “the Negroes are of all peoples those who most abhor injustice.”

It was Europe’s advantage in ships and guns after 1500 that changed all that, allowing it to:

Dominate the continent and to falsify the Negro’s personality. That is how things still stand and that is what has caused the subsequent alteration of history concerning the origin of Egyptian civilization.

It also made possible the slave trade, which both destroyed civilization in Africa and made it necessary for whites to see blacks as immoral half-animals.

At least the mummies museums like to show have straight hair. So do some blacks. But from Herodotus’s description and the sort of hair styles Egyptian women are pictured wearing, it is clear that most did not have fine, straight hair like white people.

3. Egyptians painted themselves dark red, not black, in pictures.

Dark red is within the skin colour range of black Africa, not of white Europe or Asia. Even Europeans understood that – that is until the 1800s when:

4. Blacks were slaves in ancient times. 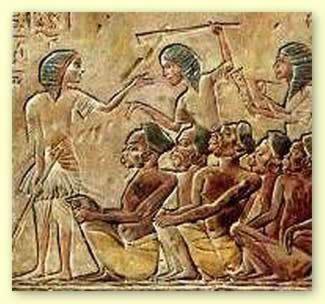 This is currently the #1 picture on Google Images for “slaves in Ancient Egypt”. Not only does this picture fit American ideas of race and slavery, it has been changed to fit them even better. Compare especially the head overseer: Some blacks were slaves. Yet some of the oldest pictures in Egypt show dark-skinned Egyptians taking whites as slaves. 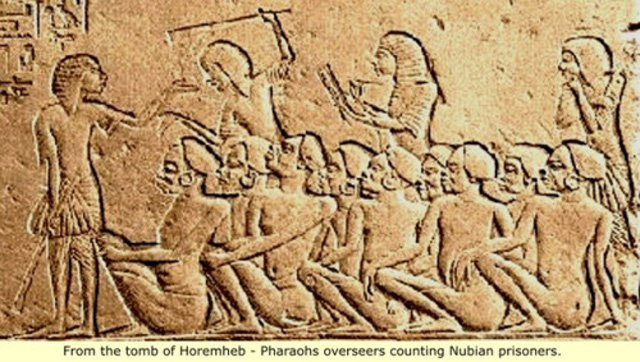 5. The Stela of Philae calls the people south of Egypt “blacks”.

The Stela of Philae

The Stela of Philae was a stone marker at the southern limits of Egypt. The Egyptian written on it calls people to the south Nahasi, southerners – not “blacks” as latter-day European mistranslation would have it. Herodotus was mistranslated the same way, some putting “blacks” where he said Ethiopians, giving readers the false idea that Herodotus saw Ethiopians as black and therefore different from Egyptians. The Egyptians themselves only used “black” (khem) to mean themselves or their country.