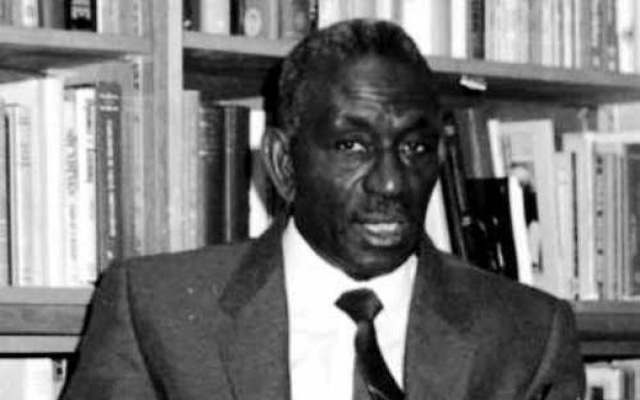 In the spirit of the fact that #EverydayIsBlackHistory we’d like to continue to remember the pioneering work done by the great Cheikh Anta Diop, who was born in Dakar on the 29th of December 1923 and died on the 7th of February 1986. Diop was a historian, anthropologist, physicist, and politician who studied the human race’s origins and pre-colonial African culture. Though Diop is sometimes referred to as an Afrocentrist, he predates the concept and thus was not himself an Afrocentric scholar. However, “Diopian thought”, as it is called, is paradigmatic to Afrocentricity. His work was greatly controversial and throughout his career, Diop argued that there was a shared cultural continuity across African peoples that was more important than the varied development of different ethnic groups shown by differences among languages and cultures over time.

Diop did his most significant work under the tutelege of Professor Frédéric Joliot in Paris. This culminated in (Diop’s) seminal work “The African Origin of Civilization: Myth or Reality” (1974) is one of the seminal works on African proto history and history. It makes the case that both mankind and civilization started with black people. It argues that Ancient Egypt was largely Black African in race and culture during the first 2,000 years of its civilization. When Diop first put forward his thesis his work was resoundingly debunked by white Egyptologists and anthropologists, notably Bruce Trigger and other Europeans. But Diop was persistent and his theories were brilliantly defended by him.

Diop’s work has posed important questions about the cultural bias inherent in scientific research. After 1960, Diop went back to Senegal and continued his research and political career. He established and was the director of the radiocarbon laboratory at the IFAN (Institut Fondamental de l’Afrique Noire). Diop dedicated a book about the IFAN radiocarbon laboratory “to the memory of my former professor Frédéric Joliot who welcomed me into his laboratory at the College de France.”

The computer wunderkind, Julian Abagond has written a comprehensive review of Diop’s great work and he published it in his blog abagond.wordpress.com a site on which he writes 500 words a day. Of course this analysis of the book makes remarkable reading, but there is no substitute for reading the book. Still if one were to look for a review of Diop’s book you would not find a one than that written by Abagond. Here it is in full:

Homo sapiens began in Africa and began as black people. It was as black people that they spread over Asia and Europe, taking the place of the Neanderthals. The rise of different races: Over time black people in northern Eurasia became light-skinned and began to look like the people who live there today.

Between -3000 and -1500, the region stretching from North Africa through the South West Asia to India became civilized: Egypt, Canaan, Elam, Indus, etc. People were dark-skinned, like they still are today in Ethiopia and southern India. The Bible calls them the sons of Ham. The Greeks saw them as Ethiopians of one sort or other.

After -1500 this region has become whiter over time as wave after wave of light-skinned barbarians over thousands of years have come down from the north. In India people were separated into light- and dark-skinned castes. Elsewhere they have mixed more thoroughly.

1. Diop: What were the Egyptians? – the ancients saw the Egyptians as closely related to the Ethiopians
2. Diop: Birth of the Negro Myth – where the idea that black people are incapable comes from
3. Diop: Modern Falsification of History – how European scholars in the 1800s began to distance Egypt from the rest of Africa
4. Diop: Origination in the Delta? – Egyptian civilization did not start in the Delta
5. Diop: An Asian Origin? – civilization did not come from Mesopotamia
6. Diop: Egyptian Race Seen by Anthropologists – there is no proof from science that Egyptians were mostly white when civilization arose there
7. Diop: Arguments for a Negro Origin – Ancient Egypt was rooted in African culture, not Asian or European culture
8. Diop: Arguments Against a Negro Origin -Diop knocks these down
9. Diop: Peopling of Africa from the Nile Valley – particularly from the country now called Sudan
10. Diop: Evolution of Ancient Egypt – mostly about the whitening of Egypt
11. Diop: Contribution of Ethiopia-Nubia and Egypt – the idea of “the Greek miracle” is rooted in a white racist reading of history
12. Diop: Reply to a Critic – replies to French historian Raymond Mauny of the Sorbonne
13. Diop: Early History of Humanity: Evolution of the Black World – how mankind started out black and stayed that way for a long time

Even apart from how right or wrong Diop is, the book is an excellent account of how whites twist history and science for their own ends and why blacks need to write and know their own history.